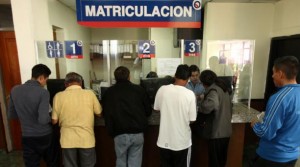 This Wednesday, February 4, the National Transit Agency (ANT for its Spanish acronym) temporarily suspended the collection of the Public Payment System For Traffic Accidents (SPPAT for its Spanish acronym), which replaced the SOAT (Compulsory Insurance of Traffic Accidents), “because of the drawbacks presented in the database of private insurers.”

Three days ago the SPPAT collectioh started as an extra fee in the annual vehicle registration, but the ANT announced in a statement: “while the transition process lasts, users who have their SOAT in force, like those who have it expired, do not lose protection in case of a traffic accident. It will suffice to present the current vehicle registration in the public and private hospitals.”

“People who already canceled their SPPAT fee are covered until to the date of their next registration in 2016, according to the schedule stipulated by the ANT,” added the statement of the entity.