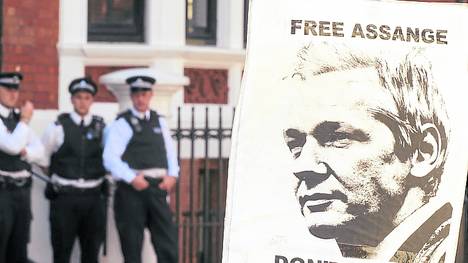 As “shameful” called the spending of about 10 million pounds (13 million euros), Julian Assange, founder of WikiLeaks by guarding him at the Embassy of Ecuador in London, in order to avoid extradition to Sweden.

Assange regrets, through his spokesman Kristinn Hrafnsson, that the British Government is willing to pay that amount to have police officers watching him 24 hours, according to statements broadcast on Thursday by the British agency PA.

“It is embarrassing to see the UK Government spending more on surveillance and detaining an uncharged political refugee than on its investigation into the Iraq war, which killed hundreds of thousands,” said the spokesman.

Hrafnsson was referring to the investigation on the role of the UK in the 2003 Iraq war, whose findings have been postponed generating great controversy.

In addition, Assange criticized the position of Sweden, which claims is surrending to question him for alleged sex crimes committed in 2010 and which he refuses to do so by videoconference or in British territory.