Attack on Camp leaves one policeman dead and seven wounded 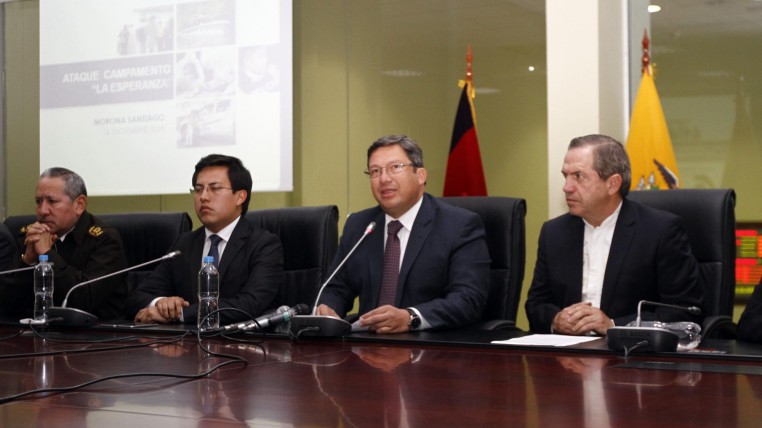 A tweet by President Rafael Correa announced: “In Morona, violent people want to take the San Carlos Panantza mining camp. We have a police officer dead and several injured. Criminals!”
Hours later, the coordinating minister of Security Cesar Navas, gave more information on TV from the ECU911. It was an attack perpetrated by about 60 individuals, allegedly linked to illegal armed groups. “At approximately 5 pm today there was a cowardly attack against the members of the National Police and the Armed Forces who were in
La Esperanza camp, in the province of Morona Santiago.”
There would be seven people injured by the attack: five policemen and two soldiers. The deceased police officer was identified as Jose Luis Mejia Solorzano.

To regain control over the conflict zone, Navas announced that for 30 days a state of emergency would be in force in Morona Santiago. “With the intervention of the Ministry of Defense, through the Joint Command of the Armed Forces and the Interior Ministry through the National Police, so that the necessary actions are taken to recover the citizen security.”

This would not be a spontaneous event, as the armament used yesterday would have been able to cross the armor of vehicles in which the injured were displaced, authorities said. “They did not take the camp,” Navas said, noting that the attack did not achieve its final task, “they just started firing from the undergrowth and perpetrated this cowardly aggression.”

Entertainment figure raised 44 laws in 8 years in the Assembly