Authorities suspended classes in schools of Monte Sinai and Los Vergeles, in Guayaquil

On Tuesday, Education Minister Augusto Espinosa announced that students enrolled in first through seventh grade of the sectors of Monte Sinai and Los Vergeles, located northwest of Guayaquil, will begin classes on June 2.

Between 10,000 and 12,000 students will have to wait for the educational infrastructure to be ready, the minister said, adding that they have been building temporary classrooms, five in Monte Sinai and four in Los Vergeles, to meet the emergency, as part of the 30 educational camps in those districts over the high demand for seats.

On the other hand the President of the Republic, Rafael Correa, during a tour at the University Hospital, recognized that there are problems with the allocation of places to students who began classes in the Coast cycle, but said that “are minimal, perhaps 2,000 protesters over 2.3 million people registered, which means less than one per one thousand, if you want to see it otherwise, is less than one percent.” 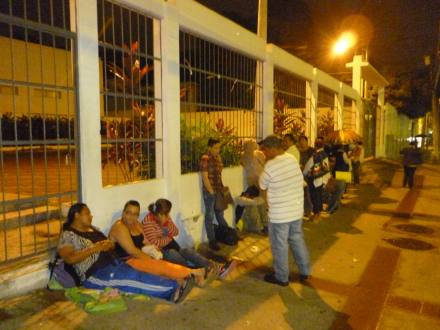 Parents wait outside the different education districts to get a seat for their children.