‘Bad news’ this year for the global and domestic economy, analysts say 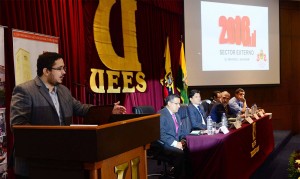 Thus they qualified the country´s situation last Tuesday during the “Perspectives 2016” economic forum, held at the Espiritu Santo University (UEES).

Santiago Bucaram, director of the Institute of Economics at the Universidad San Francisco de Quito (USFQ), pointed as the main cause of the crisis the fall of oil prices and said it would drop to $ 10 per barrel,  and the average woud be $ 35 in 2016.

This is due to the oversupply of crude in the market, this week Iran joined with 500,000 barrels per day more.

In this regard, Sebastian Oleas, professor at the USFQ, said: “We ran out of this show of huge resources.” He said, referring to oil prices the government managed until early 2014. He also cited figures from the National Institute of Statistics and Census which placed the unemployment rate at 4.77% in 2015 and noted that the labor structure has not changed in ten years.

Jorge Calderon, Dean of the Faculty of Economics of the UEES, showed concern for micro-enterprises, at his discretion, the most affected, by accounting for 90% of the country’s productive activity.

Ecuador’s largest lender of last year was the IDB