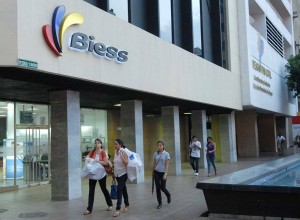 The Board of Monetary Regulation and Financial Policy authorized the Bank of the Ecuadorian Institute of Social Security (Biess) to disburse $ 120 million more to purchase debt securities issued by the Ministry of Finance. This was done last December 11 after receiving the proposal of the board of the institution.

In 2015, the Biess had planned to purchase $ 750 million in State papers, but with the reform it is authorized to purchase up to $ 870 million.

According to Resolution 162-2015-EF, after approving the reform, the Biess board submitted its proposal.

Omar Serrano, former representative of the affiliates at the Biess board, explained that it is not ideal or normal to make budgetary reforms in the last days of the year. For the former official, this is indicative of inadequate planning.”

In an interview with Ecuavisa the Biess manager, Christian Buchelli, said that this change was not due to the lack of liquidity of the Government but due to an outstanding balance.

Detainee´s lawyer awaits for the hearing