A group of ten people walked along the upper part of the Salado estuary boardwalk, near the June 5 bridge, and they quickly raised their binoculars. The sound of a woodpecker pecking at the wood incessantly caught their attention and they even photographed it. They take a couple of steps, and, among the branches of leafy trees, they capture other birds, mostly migratory birds that arrive at this point in Guayaquil during these days. 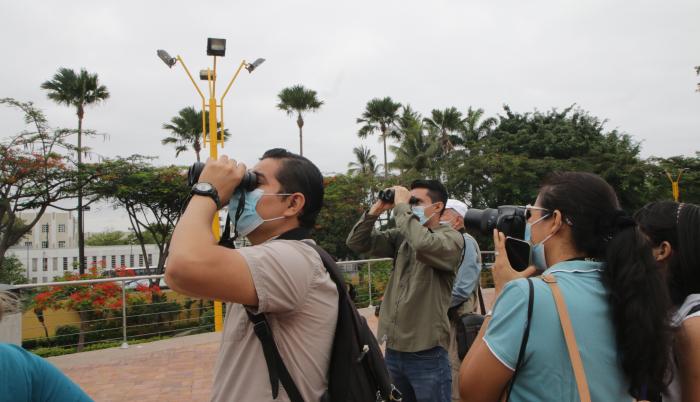 In addition to the sighting, the participants learn about the anatomy and feeding of the city’s birds.

These were some of the scenes that were evidenced this Wednesday, December 29, in the Christmas count of birds ‘Between Feathers and Mangroves’, which brought together professional observers, amateurs and the general public, to have a registry of the species. It is known that there are at least 200 in the city, but 50 birds were counted on the group’s journey.

Francisco Hernández, a naturist guide, led the group and every time a species ‘appeared’ he compared it with his texts. He was pleased to see that more and more people are interested in the activity, as he remarks that Guayaquil has propitious places for this and that the public is unaware of it.

“In a single exit there are 30 to 50 birds; this is the beginning of a hobby for many people, of any age”, he expressed.

But how to preserve these spaces, the home of the birds? Hernández suggested not carrying out drastic pruning, as has already been registered in the city, limiting the use of pesticides and not polluting the urban trees with waste or chemical products.

With him agreed Aldo Lozano, a resident of the north of the city and participant in other editions of the Christmas counts; and who hopes that this initiative will be promoted so that more citizens join the tours.

He, for example, was thrilled to find peregrine falcons. “This allows us to be able to congregate with the environment and nature; I hope there will also be more security, as we come with cameras and binoculars”, he suggested.

It is always good to document the species. I hope that this type of activity will continue to be encouraged, with more information and necessary assurances.

Aldo Lozano, participant from the north of Guayaquil