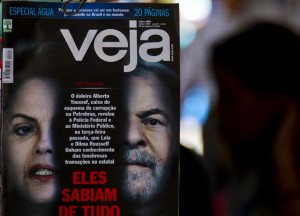 The election campaign was stirred in Brazil on Friday with an early edition of the opposition magazine Veja accusing President Dilma Rousseff and her predecessor, Luiz Inacio Lula da Silva, of being aware of millionaire diverts in the state company Petrobras.

“They knew everything,” Veja titled in red letters on the cover, with the Lula and Rousseff photo on a black background, according to the version released on internet.

The issue was brought a day in advance to reach the newsstands 48 hours before Sunday’s runoff between Rousseff and Socialdemocrat opponent Aetius Neves, just when the polls show favoritism for the president.

Dilma Rousseff announced that she will appeal to the courts to fight the allegation and accused the magazine of “election terrorism,” and of having committed a “crime” for accusing her without evidence.

“Today the magazine exceeded all bounds of decency and lack of ethics,” Rousseff said on the electoral propaganda program  that closed the campaign.(AFP)