Bullying in classrooms of Ecuador 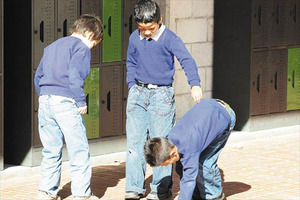 Bullying in classrooms of Ecuador

Bullying is a worldwide phenomenon that occurs equally in public or private schools. In Ecuador, according to the national survey of childhood and adolescence (ENNA), 64% of school children, aged 8 to 17, said to have witnessed fights between pupils; 57% said that they would destroy things from each other; and 69%, who annoy or abuse of children.

The report, made in 2010 by the Observatory for children and adolescents, also reveals that 63% of students bother others for being different; 74% insults or taunts; and 53% suffers from theft.

It was Dan Olweus, a Norwegian Professor of psychology, who coined the term at the beginning of the 1970s (and defined it as a conduct of physical or psychological persecution that makes one student to another. This may involve physical, verbal contact, insulting gestures or intentional exclusion, but always involves a power imbalance.

Margarita Velasco, Director of the Observatory for children and adolescents, says that it is now much more aggressive because it is more orchestrated among young people and transcends even the school field: evidence out of campus, road to the House and on social networks, an action that is known as cyberbullying.

Harassment has a direct effect on the performance of the child. An investigation of ECLAC (Economic Commission for Latin America and the Caribbean), from 2011, called Latin America: violence between students and school performance, found that in Ecuador in the classroom violence generates under performance in math and reading. In addition, the country occupies the first places (between 16 evaluated) in the figures of sixth grade students who claim to have suffered the theft of belongings (47.6%) or have received abuse physical (21.9%).

Some doctors claim that foreign physician will be non-specialised

Physical therapy carried out by a robot