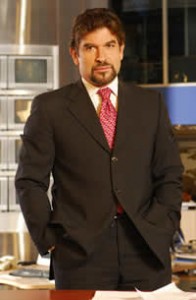 Former television anchor traveled to Washington to present his complaint to the OAS, just a few hours before the country’s Constitutional Court made public its decision on the referendum promoted by Correa, who on January 17 made public the ten questions to be reflected in the consultation, which aims to ban bullfighting, regulate press and reform justice.

Vera said that the referendum “violates the American Convention on Human Rights, because even when it is a democratic mechanism, it applies totalitarian measures that aim to legitimate and enshrine dictatorship in Ecuador just as President Hugo Chávez in Venezuela.”

Attorney Roberto Lopez, who filed the complaint with Vera, said the consultation has an adverse effect on nine provisions of the Convention, including: personal freedom, freedom of speech, press freedom and the right to progressive development. “It is deplorable that a referendum is against the fundamental rights of citizens,” said Lopez, who also questions the Constitutional Court, which is in charge of dictating the legitimacy or illegitimacy of the questions.

If the Commission accepts the request, the Ecuadorian Government shall authorize an OAS mission trip to come into the country in order to begin an analysis of the case.

If the two complaints that Vera and Lopez have filed with the Commission have no effect, “the fight will move from the legal authorities to the streets,” they say. “In Ecuador, we are ready to battle in the streets,” said Vera.