The sector requires the implementation of a public policy to compete against the vehicles that enter through commercial agreements and tax preferences.

The participation of vehicles assembled in the country was reduced by 11.8 percentage points in 2017 compared to 2016. According to the Chamber of the Ecuadorian Automotive Industry (Cinae), the decrease is due to the absence of a comprehensive public policy that regulates the sector and allow them to compete with the vehicles that enter the Ecuadorian market with tariff preferences from different countries.

According to David Molina, Cinae’s executive director, since 2012 there has not been a proper boost to the national industry that allows it to be competitive with imported units with tariff preferences. 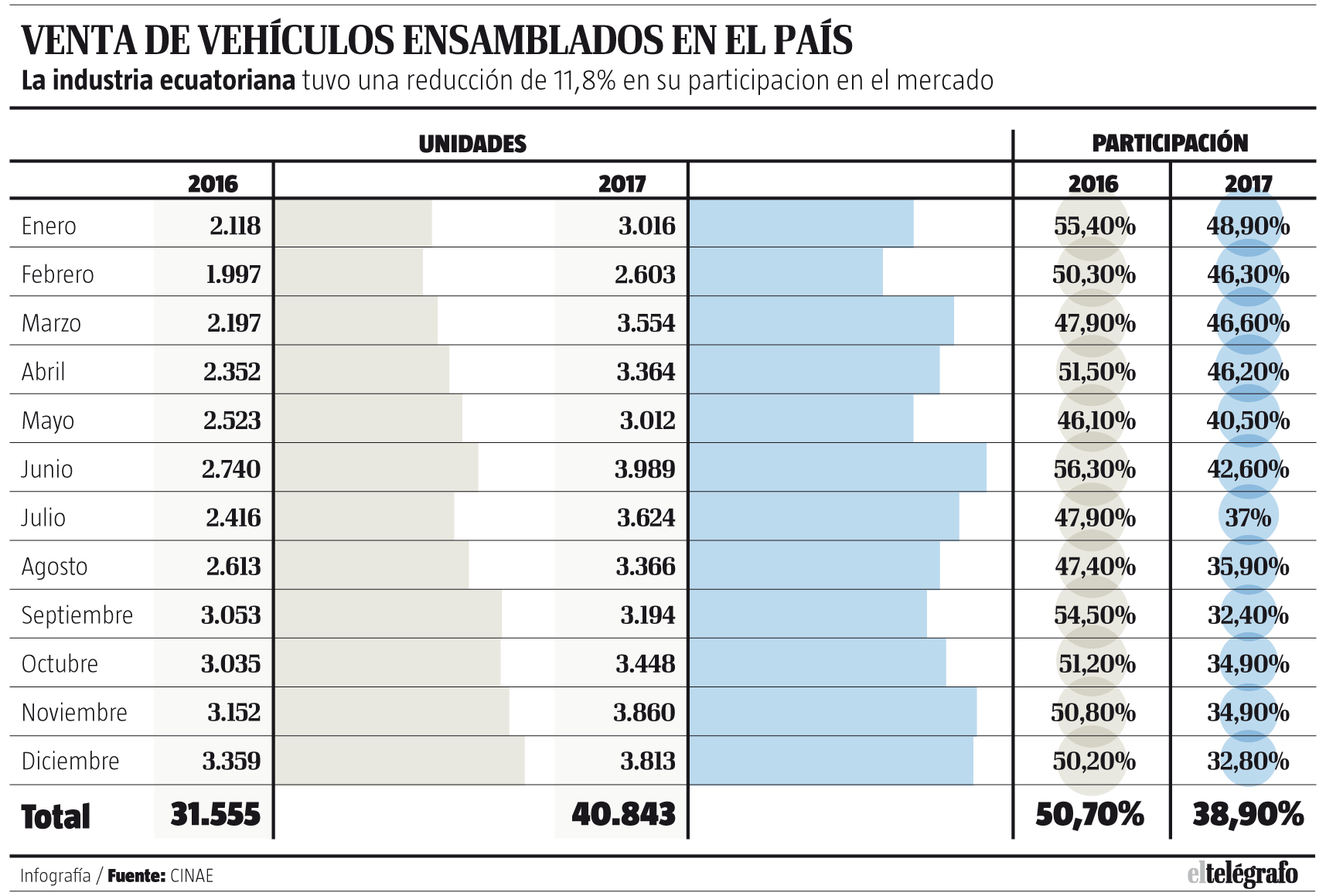 Data from the Association of Automotive Companies of Ecuador (Aeade) show that a year after the trade agreement entered into with the European Union (EU), three brands entered Ecuador with 13 new models assembled in France, Hungary, the Czech Republic, Italy, Germany, the United Kingdom and the Netherlands.

Likewise, its participation in the market increased from 2% in 2016 to 4% last year. The assembled vehicles in Colombia went from 4,269 units sold in 2016, with a market share of 6.9%, to 8,502 vehicles sold last year, with a participation of 8.1%. “The national industry does not oppose these trade agreements, on the contrary, it supports any integration process whose balance is positive for the country.

However, it is essential that public policy is aligned to this reality and generate instruments that allow the industry to compete on equal terms with imported vehicles that enter without tariffs or with preferential rates, “questioned the automotive entrepreneur.

He explained that in 2012 the Committee on Foreign Trade (Comex) approved a tariff table to encourage the national industry to incorporate more local component in the assembly of vehicles, however that measure was never implemented because the agency “did not find an application mechanism. They spent five years in a technical discussion about its application. ”

A formula that has driven since then this industrial sector is that “the greater the integration of the local component, the lower the tariff to be paid, which would mean that the industries that request a tariff reduction, in order to compete, will earn it in the market through of an industrialization process “.

This proposal was exposed to the Minister of Industries, Eva García, and to the Minister of Foreign Trade, Pablo Campana, within the framework of the dialogue roundtables and it was announced that it would be applied. “But to date the approval of the inverse tariff table has not been given to the local content,” Molina said.

The industry asked President Lenin Moreno for a hearing to present the situation of the sector and the expectations about the approval of the tariff policy, in the generation of jobs, investments, exports and the substitution of imports. La Cinae considers that the application of the tariff table could generate in the sector the recovery of at least 2,000 jobs. (I)