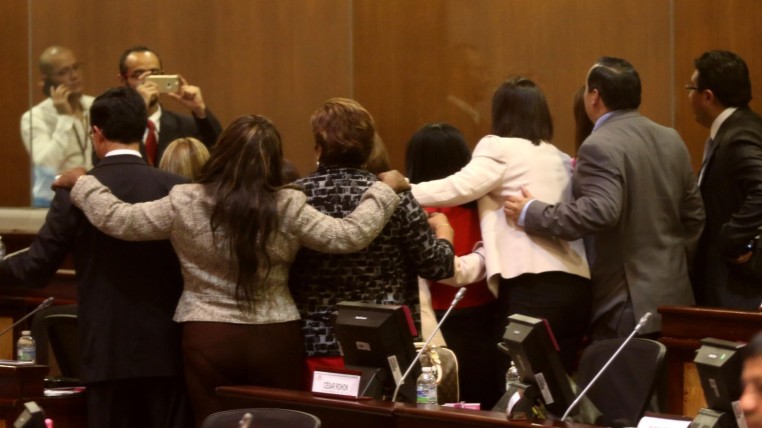 Alicia Cawiya returned to the Legislature but no legislator from the Alianza PAIS ruling party was there to welcome her. Four years ago, in October 2013, the vice president of the Huaorani communities was contacted by the state and taken to plenary to support the oil extraction project in the Yasuni National Park; She was give a prepared speech and waited patiently for the opposition´s reaction. But Cawiya has her own criteria: she set aside the discourse and improvised her own against exploitation.

and now she has returned with a message: the oil activity is going on and is going out of control. One word sums up the suffering of those who inhabit the Yasuni: Ethnocide. “They have taken and reduced our territory, there is only a bit left for our Taromenani brothers,” said Cawiya with her precarious but yet resounding Spanish. Melisa Moreano, from the Critical Geography collective, presented a report that corroborates the critical situation: up to the date, the directly impacted is 3,000 hectares, three times the number of what the government self-imposed at the beginning of the extraction works.

But the most disturbing aspect for the Commission and the ecologists are the declarations of the Minister of Hydrocarbons Carlos Perez, who admitted to having recorded sightings of uncontacted tribes in the heart of block 43 (ITT). “In the event of tribal sightings, activities will be suspended immediately,” says the declaration of national interest of 2013, through which the Legislature authorized the oil extraction in the Yasuni. The Commission on Collective Rights has demanded to enforce this provision and is preparing to sue the state.

That can take time. Yesterday, after several suspensions, there was finally a plenary session. But the official bloc continues to evade the political debate. Time runs for the Taromenani people but for the ruling party, it is still detained. (I)