Chile announces arrest for those who enter disputed border area 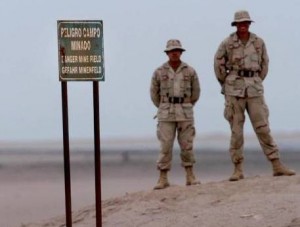 The Chilean government announced today that it will detain Peruvians who enter the called “triangle land”, a frontier area disputed between the two countries.

The announcement was after made ​​that activists of the Patriotic Tacna Civic Committee announced they will march to the desert area on Wednesday, claiming the Peruvian sovereignty over this area of just 3.7 hectares.

“Detainees were taken, all people have to enter to Chile for the crossings which correspond,” said Deputy Interior Minister Mahmud Aleuy.

Aleuy stressed that the Chilean police “have the conditions” to control the fly “by bulk it be.” “We have not stipulated have major problems in the border on Wednesday,” he said.

The government’s announcement this Tuesday coincides with the warning on Monday by Defence Minister Jorge Burgos, who recalled that in the area there are still landmines.