Christian Cruz was exempted for the state debt with the IESS 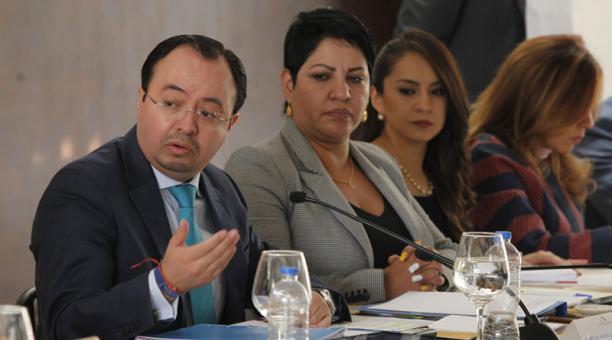 “Lie, lie, lie,” repeated the superintendent of Banks, Christian Cruz, during the hour and 20 minutes that lasted his appearance before the Commission of Control of the National Assembly for the impeachment that is against him.

This trial, based on eight accusations, evaluates its control to the administration of the Ecuadorian Institute of Social Security (IESS). The request was made in November 2017 by legislator Raúl Tello, member of the Commission. At 11:07 yesterday the session of the Commission began, where the official explained his performance on this issue, in the middle of a heated debate.

“We are not afraid of oversight,” were the first words of the official, who was on the left side of María José Carrión, president of the commission and who was sitting in the center of a long table occupied by the rest of the legislators. The State’s debt with the IESS for medical care for retirees and people with disabilities or catastrophic illnesses focused on the first accusation, in which it is held responsible for having allowed the former president of the IESS Board of Directors, Richard Espinosa, to fail to comply with the resolutions issued by the Comptroller’s Office Cruz argued that the first review of the Comptroller’s Office regarding the debt with Social Security began in 2013, two years before he assumed the position of superintendent, in January 2015.

The Comptroller’s recommendations, which asked for the conformation of an inter-institutional commission to establish the debt values, were issued a month later. However, this commission determined that there was no such debt due to the lack of a regulation to the Social Security Law. Based on this conclusion, the IESS eliminated in September 2016 the state debt, for USD 2 500 million, of the financial statements of the IESS.

This fact was criticized by affiliates and retirees, given the complex financial situation that the health fund was going through. But the issue was questioned by the Comptroller’s Office, which decided in 2017 to eliminate the debt elimination of the financial statements of the IESS. Finally, the agency sanctioned Espinosa and other officials with dismissal and fines for this fact. Cruz reiterated that the Comptroller’s recommendations were met and that Espinosa’s dismissal was not among his functions. On his “omission” before the “breach” of Espinosa in the presentation of financial statements of the entity before the Board of Directors, he indicated that these could not be approved by the Board without being audited, a requirement that was not met.

However, he assured that the agency receives monthly the financial statements of the IESS. “Let’s go with the next lie”, was the qualification used on several occasions by Cruz to refer to the accusations against him.

The phrase was the cause of a wake-up call from Assemblywoman Carrión. Then the legislator Tello, visibly annoyed, interrupted to demand “respect” from the Superintendent. Another one of the accusations makes reference to its action in front of the redistribution of the percentages of contributions of the insured ones to the bottoms of the IESS, increasing in principle the contribution to Health and diminishing the one of Pensions.

Cruz justified the decision in a report by the actuarial Volsrisk, which certified that there was no effect on the solvency of the funds. However, a report by the International Labor Organization (ILO) determined that this measure did have a negative impact on the financial sustainability of the Insurance.

Although not part of the accusations, Cruz disclaimed the statement of reservation of the actuarial reports of the IESS, noting that the measure entered into force before he took office. “Does the withdrawal of the debt values from the balance sheets of the IESS affect the sustainability of the IESS? The intent to harm affiliates and retirees existed. The reservation of the reports was valid in his period, that does not exempt him from responsibility, “said Tello, who also reminded the assembly members that they were not allowed to access the reports.

Other parliamentarians, such as Daniel Mendoza and Karla Chávez, said that the Commission’s commitment is to seek the truth. “Affiliates and retirees demand clear answers. In accordance with the Social Security Law, financial statements must be presented, “Chavez added. Cruz acknowledged that there have been many years in which the IESS balances have not been approved by the Board of Directors, but he said that before his requirements the entity answered that the audit is missing. (I)