Citizens turn their complaints to the Cpccs of transition 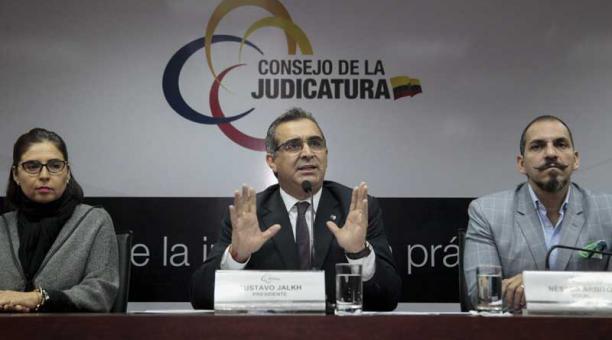 In the 30 days that the Council for Citizen Participation and Social Control (Cpccs) has been operating, the entity has received 183 complaints about alleged acts of corruption.

In its first month, this entity has focused its work on two fronts: the processing of these complaints and the preparation of regulations for the evaluation and designation of national control authorities.

In the subject of the regulations, the instructions for the evaluations have already been concluded. And the processes for the Judicial Council, the General Prosecutor’s Office, the Electoral Council (CNE) and the Superintendency of Banks were undertaken.

The first stage of evaluation will be the investigation, based on reports that the authorities must deliver in the next six days and the complaints that citizens can submit for five days.

This part of the process will converge with the treatment of the 189 complaints that have come from citizens, unions, politicians and assembly members.

Everything will fall on the teams led by the Secretariat of Transparency of the Transitory Council, led by María de Lourdes Arboleda. She is a member (with license) of the Anticorruption Commission.

For the evaluations there will be a team for each institution that will analyze the reports of the authorities. It will then issue a report for approval by the Plenary. And, before deciding whether or not the official is dismissed, the Board will receive the evaluated at a public hearing.

But, at the same time, the other Cpccs teams will analyze the rest of the complaints presented and those that continue to arrive. And, if there are cases that involve the evaluated ones, they will copy the file to the specialized team in that institution.

The Council has also had to face administrative and economic problems to put together these teams, since evaluation is an exceptional activity.

According to counselor Xavier Zavala Egas, all occasional contracts were terminated and only career officials were kept. And the vacancies, regardless of the area to which they corresponded, were used to hire researchers.

Researchers who were already in the entity were also conserved, although before they did not have good results. According to the diagnosis made by Arboleda, this was due to the fact that there were guidelines for the Secretariat not to fulfill its function. The mechanism used was to omit what was happening in the central government and investigate only the decentralized autonomous governments.

Shortly after his appointment, Arboleda said that in the last 10 years there were 3,000 corruption allegations that were not addressed. After a month, he says that figure fell short, but the information to corroborate this data is not in the file.

Because of the level of complaints, the Council is aware that in a year it will not be able to evacuate everything. Its objective is to leave a new work base and processes to continue in the next period.

The Cpccs ordered the suspension of the competitions for appointing prosecutors that the Judicial Council had in place, until the evaluation of that entity is completed.

On April 5, 2018, Gustavo Jalkh, head of the Judiciary, complied with the resolution, but asked that the decision be reviewed. He argued that the Cpccs does not have that power and that there is no legal reason to suspend them. He said that the citizen’s right to participate in the processes is being curtailed. There are 7,000 vacancies in the judiciary with 35,000 applicants. And he warned of the economic consequences of the hiring underway for the contest.

According to the mandate of the referendum, the Council of Transitional Participation will be in office until the final members are elected, at the polls, in 2019. At the moment, two superintendents have been dismissed: Carlos Ochoa and Patricio Rivera. (I)