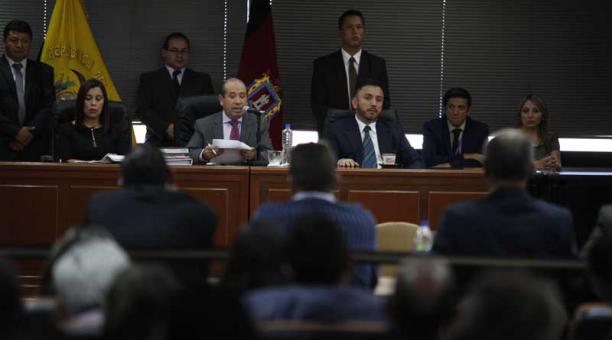 For politicians and former officials who are linked or investigated in cases of corruption, question 1 of the constitutional referendum is of particular importance. With their approval, if they become sentenced, they cannot return to political life or be officials.

David Chávez, a sociologist at the Central University, believes that this was the key question of the consultation and referendum. It warns that it could give way to a judicial persecution against different political actors, among them Rafael Correa. Luis Verdesoto, coordinator of the Platform for Democracy and Human Rights, agrees.

For him, a “sensible” legislation is required, to avoid that this regulation is misused. That was done, he adds, in the question to prevent indefinite re-election, which prevents any political figure that has been re-elected since 2008 from returning to that position, which includes Correa.

But, with the approval of question 1, no one who has a sentence for corruption (public or private) can be a candidate for any dignity or hold a public office. This will be, for example, the future of former Vice President Jorge Glas Espinel, if his sentence for illicit association, in the corruption case Odebrecht, is maintained at the end of the judicial process. In the list of public officials investigated for crimes of fraud against the State is also former Comptroller Carlos Pólit, for alleged concussion.

It could also be the situation of Ramiro González, former president of the Board of Directors of the IESS and the Avanza party, who today is being investigated by the Attorney General’s Office for alleged tax fraud and illegal private enrichment when he was in charge of the IESS. Currently he remains at large.

In addition, there are several investigative processes in the Office of the Prosecutor that link public officials, in addition to the reports of the Comptroller General’s Office, which may predetermine penal responsibilities for corruption. There are also requests from political actors and the National Anticorruption Commission (CNA), to investigate new cases involving officials and former officials.

In this list, some accusations point to finally linking former president Rafael Correa. But the Prosecutor’s Office has not associated it with any of the current processes. However, the day after the elections, on Monday, the Office of the Prosecutor did summon the former president to render his free and voluntary version of the investigations of the so-called Petrochina case, on a possible prejudice to the State in the early sale of oil to the Eastern giant. Correa has already called the investigation “political persecution”.

“There is no responsibility on my part. I just approved a pre-sale in 2010. They only want to put Correa prisoner, “he warned. The question, which posed the disqualification to participate in national politics and the loss of assets for corruption cases, was the one that received the most support at the polls, almost 74%. He followed closely the question to prevent the prescription of sexual crimes against minors.

But this proposal of the Executive is not new. There are several political actors who have raised the known ‘civil death’ and reparation to the State for the damage caused. For example, Pachakutik, the Democratic Left and, even, the same holder of the Legislative, the official José Serrano.

However, in the country there were already tools to attack corruption: the Financial Analysis Unit against Money Laundering, the Public Procurement Law and the Comptroller’s Law. The same Comprehensive Organic Penal Code (COIP) establishes penalties for said crimes and integral reparation for the damages caused. Even the Constitution prevents those who have been sentenced to imprisonment for crimes such as bribery, illicit enrichment or embezzlement from being candidates.

What the Executive’s initiative did is broaden the catalog of disabling crimes. And it aggravates the situation of the servants of the public sector, in general, who are involved in crimes related to acts of corruption. The proposal of President Lenin Moreno seeks to avoid “the means and devices used to injure the State and prevent its intervention.”

It raises to the constitutional level the impediment to be a candidate for popular election, to contract with the State, to hold public office and the loss of the rights of political participation. Moreno, from his presidential possession, offered a ‘major surgery’ to corruption. In August he said: “We will not allow corruption to dominate the country.” And he called on the authorities not to allow, under any circumstances, to stop the investigations “that lead to punish those who have plundered the resources of the country.”

And just last month, the prosecutor Carlos Baca also announced the creation of an Organized Crime Unit. These specialists will help dispatch 56 cases of corruption rated as emblematic for their sensitivity and the level of social commotion they caused.

In this list are, for example, cases related to the Petrochina, Petrotailandia and Odebrecht cases, the latter turned out to be the largest plot of regional corruption uncovered in recent years.

35.5 million paid by Odebrecht in bribes in Ecuador

14 million repairs include the sentence to Jorge Glas (I)