The  sea lions  are iconic species of  Galapagos . They can be seen lying on the beaches, resting on the sidewalks or lining up with tourists to get a fish. Although it is common to find them in any corner of the islands, these animals are in  danger of extinction  and their populations are threatened by  climate change . 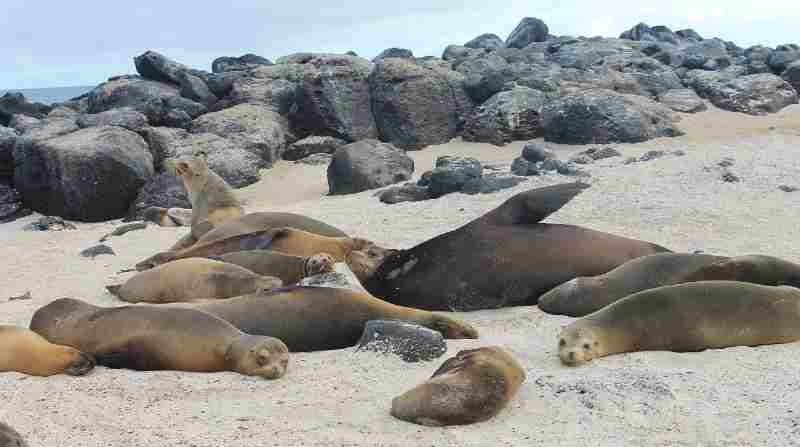 A recent study, published in April 2021 in the journal  Scientific Reports,  shows that the El Niño event  is the main threat to the two species of sea lions that inhabit the archipelago. Added to this are human activities and overfishing outside the marine reserve.

Both  the Galapagos sea lion and the fur seal are endemic , which means that the archipelago is the only place in the world where they live. Therefore, the decline in their populations generates even more concern.
Research reveals that an average of 21,493 Galapagos sea lions were recorded in 2014. A year later the figure was reduced by 23.9% and in 2018 a recovery of its state was estimated with a population of 19,929 specimens.

Diego Páez-Rosas,  professor at the  San Francisco de Quito University  and a researcher associated with the Directorate of  the Galapagos National Park,  explains that this study arose from the need to have data on the state of the animals. To interpret the results, it is necessary to take into account the only two previous studies that have been carried out on the number of Galapagos sea lions. At the beginning of the 2000s, around 16,000 were recorded, while at the end of the 1970s there were 40,000.

This means, says the researcher, that the population has remained stable from 2001 to 2018, but “the increase is zero.” During these two decades they have not managed to return to the levels that were recorded 50 years ago. The results should not be interpreted as an improvement in their populations.

To make comparisons, the USFQ researchers with the support of the GNPD monitored the animals on the islands every year. The decrease of specimens in 2015 is related to the El Niño event. The same had already happened between 1982-1983 and 1997-1998, when this natural phenomenon was also recorded in the  Pacific .

This article evidences the current impact of ocean warming on population dynamics. Páez-Rosas explains that the natural event  especially affects sea lions  because they are characteristic of cold and temperate ecosystems. These have managed to remain in Galapagos because it is an atypical region in terms of primary productivity within the equatorial region.

Both species have shown great resilience capacity. Over the years, they have been constantly evolving. The Galapagos sea lions have become the species in their group that dive the longest and have modified their feeding habits to adapt to the changes that occur in the waters around the islands.

In addition, it can be observed that after three or four years of El Niño they begin to recover again. The problem is that  climate change is causing the event to become more frequent and powerful.  This would not give them time to get over it.

Páez-Rosas explains that El Niño has been present on the planet throughout its history,  but now there are other stressors that reduce the resistance capacity of species to these events. Contact with humans, overfishing, and introduced species, such as cats and dogs, could increase your risks.