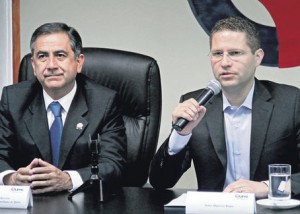 The outgoing mayor of Quito, Augusto Barrera, and the elected Mauricio Rodas, began the transition in the capital Mayor yesterday at the Municipal Palace.

The topics reviewed by the authorities at the Municipal Palace were the working methodology, the definition of the information flow of municipal entities and running processes in the city.

The proposal of the current administration is divided into three stages: the first one running until the second week of March, when the delivery of information about organizational structures, existing plans and staffing structure will be implemented.

Later, between the 30th of this month and April 4, details about the projects status and budget will be provided, considering the cut-off date of March 31.

Rodas confirmed that in order to make way to the transition, he will apply the methodology of the United Nations Development program, which has had “success in other countries and cities.” In addition, the ongoing actions will have continuity.