Complaints for the hours it takes to deliver a container 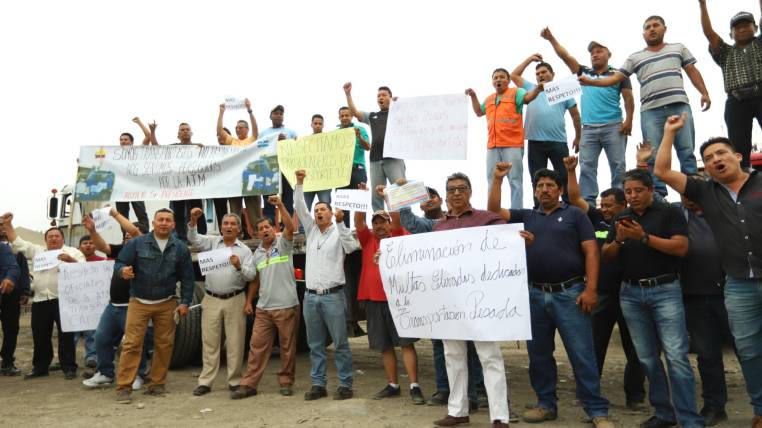 Up to 10 hours involves delivering a container in the specialized yards for it, according to the carriers that yesterday from 06:00 participated in a sit-in on the 25 de Julio Avenue, outside the Port of Guayaquil and on the Perimetral road.

Fernando Bonilla, president of the Chamber of Heavy Transport of Guayaquil, told Diario EXPRESO that for a month to deliver the container one must request a shift, through the internet. “The waiting time is up to 10 hours since you request the shift, at best. There are comrades who have left their turn for the next day. That’s how you lose money. ”

A group of drivers estimated that they stop earning about $ 200 per day, being parked waiting for the turn to deliver the container.

But, not everyone agrees with that vision. Javier Moreira, president of the Maritime Chamber of Ecuador, indicated that every union has the right to express itself. But, in this case, the modality of assigning shifts is new and will need time to work well. He emphasized that requesting the time of delivery of the container was an idea of other members, to avoid ATM fines, of two basic salaries ($ 772) for being parked on the road causing traffic congestion.

Carriers recognize that this is a problem that takes several years. Before the shifts that there are now, the trailer had to travel along the tracks until the container is delivered, according to Santiago Garzón, spokesman for the Interinstitutional Committee for the Development of Heavy Transport of the Coast.

During the sit-in, it was also requested that there be no differentiated payments for the service. According to Rafael Gomez, transporter for 28 years, they charge 35 dollars plus VAT if they deliver the container in the day and 50 dollars plus VAT, if it was at night.

At this point Moreira clarified that they are not all courtyards that charged that, only one and already would be making arrangements so that the collection is the same.

The transporters also complained about the insecurity. Darwin Bastidas, driver, said that they steal cell phones, watches and wallets while they are parked waiting to enter the port, so they ask for more police presence.

Until the end of this edition the heavy transporters were kept in a meeting, to determine what measures they will take, since their first goal is to personally talk with the mayor of Guayaquil, Jaime Nebot. And yesterday they did not make an appointment with him.

Thousands of dollars in losses

The sit-in caused thousands of dollars in losses that, according to Camae, it was not possible to estimate the total amount. But, to have an idea Jaime Lanata, general manager of the logistics company Cargolan, indicated they stopped receiving $ 10,000. He stressed that if today everything is normalized, the work will be accumulated throughout the foreign trade chain.

In front of the plantón the transporters waited for a communiqué of the mayor Nebot, but it did the general manager of the ATM, Andrés Roche. He said that Luis Lalama, director of Traffic Control of the ATM and the director of Justice and Surveillance of the Municipality of Guayaquil are going to inspect the container deposits, to see if they are complying with the law, to speed up the processes there.

Roche recalled that by closing roads or paralyzing a public service there is imprisonment of 1 to 3 years and fines for traffic violations. (I)