CONAIE admits it has a building in Quito since 1989 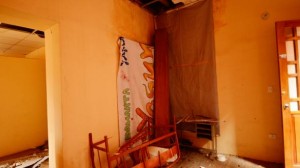 The Confederation of Indigenous Nationalities of Ecuador (CONAIE for its Spanish acronym) keeps a building of 73 m² in the historic center of Quito, which was acquired by the organization thanks to the German cooperation in 1989 and is currently used as a reception center for its leaders and indigenous students.

The three-story house shows an obvious deterioration and abandonment by the passing of years. This is kept under these conditions due to the lack of funds, said the president of CONAIE, Jorge Herrera. Inhabitants make small contributions to pay utilities.

The explanation of the existence of this property was made after a group of indigenous former leaders denounced this house was mortgaged and was used for the benefit of its leaders. This is the only asset CONAIE has with supported by documents, said Herrera. He denied that a political dispute is generated “with the sole aim of damaging the image of the organization.”

Because the conditions are not suitable for the operation of the seat, he will insist that the MIES keeps the loan of the building in northern Quito.