CONAIE plans a convention for March 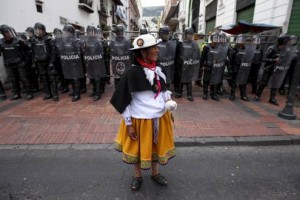 The order of the Ministry of Economic and Social Inclusion (MIES) to the Confederation of Indigenous Nationalities of Ecuador (CONAIE) to return the seat that was granted to them in commodatum in 1991, is a theme that keeps the organization holding conversations and meetings.

Even after Minister Betty Tola announced that the measure is in abeyance, while analyzing a replacement request brought by the organization, the threat of an eviction made the indigenous declare an emergency and prepare a convention for next March, in which they do not discard a call for a national uprisings of its bases.

Carlos Pérez Guartambel, ECUARUNARI leader, said that the attempt to revoke the loan of the headquarters of the CONAIE would be just one more of the rights for indigenous that would have been violated by the Executive branch.

“One of the issues is the mega mining, which has generated evictions in communities and has led to other issues such as the criminalization of protest and the death of the innocents (…). This is a topic that if you can rank, is the most important for the country,” said Perez Guartambel.

It has not yet been defined where the convention of march 5 and 6 will be held, however within the movement is being discussed on possible actions before a closure to the dialog from the regime.

In addition, issues such as the rejection of the Water Act and the demand for the Land Act to include a binding legislative consultation, and  a redistribution of land that constitutes a historical payment to indigenous communities.