A new reform to the Law of Human Mobility will enter into debate in Ecuador , after six sentences of the Constitutional Court . The rule must be approved by the Assembly within a maximum period of 18 months. 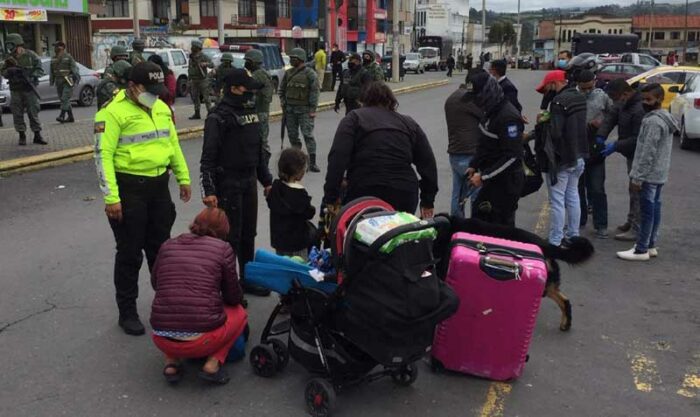 The immigration authorities carry out a control in the area of ​​Rumichaca (Carchi), upon the entry of foreigners into Ecuadorian territory.

The Administrative Council of the Legislature (CAL) will meet in the next few days to qualify the project. The initiative was presented on August 3 by the Ombudsman’s Office , with the support of the Public Defender’s Office and civil organizations.

In its 24 articles and six provisions , the project addresses sensitive issues such as: the principle of non-refoulement, deportation and admission, refuge and revocation of nationality.

According to the Ombudsman, César Córdova, the aim is to “eliminate the discretion that may exist on the part of public officials, in the decision to admit or not foreigners who want to enter the country.”

Nina Guerrero, former public defender, participated in the drafting table of the proposal . In her opinion, the reform approved by the Assembly to the Human Mobility Law in 2021 ignored the standards of the Constitutional Court by “beginning to introduce restrictive parameters of human mobility”, which is intended to be reversed.

“The Assembly resumed the deprivation of liberty for the deportation of migrants, when the Court in a previous sentence established that it is unconstitutional, a violation of human rights to deprive a migrant for his migratory status, for being irregular.”

The reforms at that time were promoted by the government of Lenín Moreno with the aim of dealing with problems such as human trafficking derived from the free entry of foreigners into the country.

The deadline for the procedure is stated in the ruling of January 27, 2022, where the Constitutional Court declared the rights to motivation and legal security of five Cameroonians and one Nigerian who were held at the Quito airport violated .

In addition, other Court rulings were included that prohibited the collective expulsion of migrants , as occurred in the Correa government and differentiated treatment for migrant children with respect to adults.

Basic guarantees in the deportation procedure.

a) Deportation must be a last resort and guarantee the principle of non-refoulement for all foreigners. b) The right to be tried within a reasonable time and to be present during the proceedings without prejudice to the adoption of non-custodial precautionary measures to guarantee their appearance. c) A deportation process cannot be initiated with information obtained from public services that attended to migrants.

The person may not be returned or expelled to another country, whether or not the country of origin, in which their rights to life, liberty, integrity and security, both personal and that of their families, are at risk of being violated because of their ethnicity, religion, nationality, ideology, gender, sexual orientation, belonging to a certain social group, political opinions. Also when there are well-founded reasons that she would be in danger of being subjected to serious human rights violations, according to the law.

In no case can a child or adolescent, separated or unaccompanied, be inadmissible in Ecuadorian territory. Immigration control officials will guarantee their regular entry, safeguarding the best interests of the child or adolescent, their right to be heard, their non-victimization, family reunification, for which they will apply the regulations established for this purpose, which includes the procedure for entry, stay, transit or exit from Ecuadorian territory.