Conversation with police put the dissident on Interpol’s red list 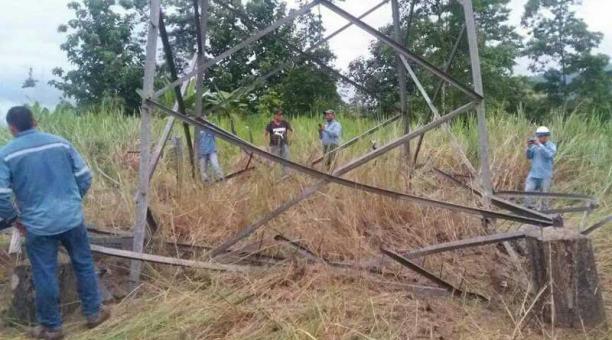 Caution: he is armed; dangerous, violent and elusive. This is how Interpol describes Walter Patricio Arizala Vernaza, alias ‘Guacho’. Since May 14, the person in charge of the so-called Óliver Sinisterra group, dissident of the FARC, has been receiving red coverage.

That is, it is on the list of fugitives sought internationally. In the two-page document, where his arrest is ordered (number A-4909), there is a brief description of his physical appearance, his identity and the reason why he must be captured: “terrorism”.

Specifically, he is linked to the attack of April 4, 2018, on an electricity tower in the Viche parish, canton Quinindé, in Esmeraldas. This is the only trial for which, up to now, alias ‘Guacho’ has been prosecuted. The Prosecutor’s Office has another 10 cases in which the dissident has been investigated.

On June 12, charges will be filed against him for the explosion of the car bomb that destroyed the police station in San Lorenzo, Esmeraldas. To include the ex-guerrilla in the Interpol red list, it was necessary for a judge to request it. Therefore, in a reserved hearing he was linked to the terrorism case, on May 8, 2018.

In that file, the Prosecutor presented as evidence against the leader of the illegal armed group the conversations he had with two police officers between May 13 and 20. January and March 25. The telephone call he made to a colonel, on April 25, was key to establishing his authorship in the threats of attacks, kidnappings and deaths.

That call lasted 4 minutes and 45 seconds and was intercepted by agents. The dissident’s voice was checked against a sample that the experts extracted from the interview that ‘Guacho’ gave to the RCN network, in Colombia, in October 2017. The coincidence was 99%, according to investigators of the case.

In that conversation, he says he has his “people mining the (Ecuadorian) territory” and that there are more than 3,000 mines installed on the border. “To ‘remove the mines you have to withdraw the Army (sic),” he warns. Another evidence that was used to issue a red broadcast against him was the triangulation of calls from a telephone number ending in 887, which was allegedly used by alias ‘Guacho’ before and after the explosion to the Viche power tower, April 4th .

In that judicial file were included, in addition, the transcriptions of the messages by Whatsapp that he had with a major of the Police. In one of the messages, dated March 16, the suspect warns him. “Stick to the consequences,” he says, by demanding that his detained men be released. Intelligence Agents of the Police who were aware of these conversations say that, in these communications, “the strategy (of the uniformed) was to reassure him, to gain time and to have evidence to legally link him, as we did”.

This communication channel, which was opened by the intelligence service, was closed when the newspaper team of EL COMERCIO was kidnapped on March 26. From that moment, the Anti-kidnapping Unit (Unase) was in charge of managing the communication with the ex-guerrilla. In its red diffusion of capture, the Interpol indicates that ‘Guacho’ is Ecuadorian, a native of the Limones canton, in Esmeraldas, and includes two possible dates of birth: January 17, 1981 and August 9, 1989.

The names of His parents. A birth certificate is included in the court file. On its appearance it is noticed that it is of Afro origin, has black hair, thin and is 1.50 meters high.

In addition, he has the eyelid of his left eye fallen, the left cheek bone inflamed and a scar in the nose. The arrest warrant also mentions that Ecuador will request extradition in case the suspect is caught outside the country.

This will be done in accordance with national laws and treaties signed with other nations. By the explosion of the tower in Viche, the dissident faces a sentence of up to 13 years in prison.

On April 5, a day after the attack on the Viche tower, the police arrested eight people in different raids in Quinindé, Esmeraldas and San Lorenzo. Inside a house was found ‘an anfo’, an artisanal explosive that was used in that and other attacks. (I)