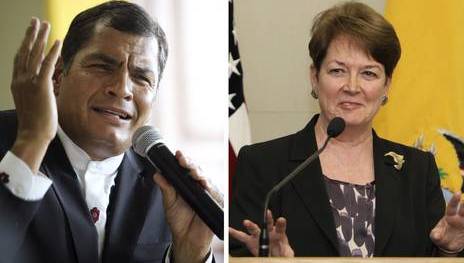 The Ecuadorian president, Rafael Correa accused the U.S. embassy in Quito to commit espionage within the police and local armed forces, which is why he decided to declare unwelcome person to Ambassador Heather Hodges and asked her to leave Quito on Tuesday.

Correa said: “(…) the trouble is that Wikileaks says they have informants within the police and the armed forces and, if they had information about corruption, they should request a meeting with the chancellor. This is espionage.”

The President has challenged the participation of the U.S. Embassy in some projects to support the Ecuadorian police, who often face allegations of corruption by the population, though he acknowledged that there is corruption in the police and said his government is making efforts to end it.

Ricardo Patiño, Ecuador’s foreign minister, acknowledged that diplomatic decision against the U.S. government was to defend the “honor” of the agent. With the withdrawal of ambassadors in both countries, bilateral relations remain at the level of business managers.