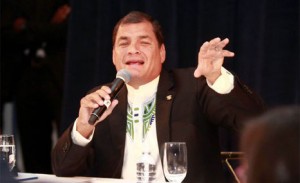 President Rafael Correa dismissed the criticism that several U.S. senators made few days ago through a letter motivated by the strained relationship with the press and opposition groups, and the deterioration of bilateral relations.

“I do not hope to meet any of those senators. But this country needs to remember its history: when President Abraham Lincoln was criticized for pressuring the opposition and imprisoning people. But it all was to end slavery and now history considers him the best president of this country. ”

“We reject the double standards of some sectors in international politics, human rights, among other issues,” adding that “this intrusion and the double standard disturbs, it is a full provocation to the president during his visit,” he added.

Correa described as “meddling” in affairs of Ecuadorian politics the letter of senators, and requested mutual respect as a requirement to improve bilateral relations.