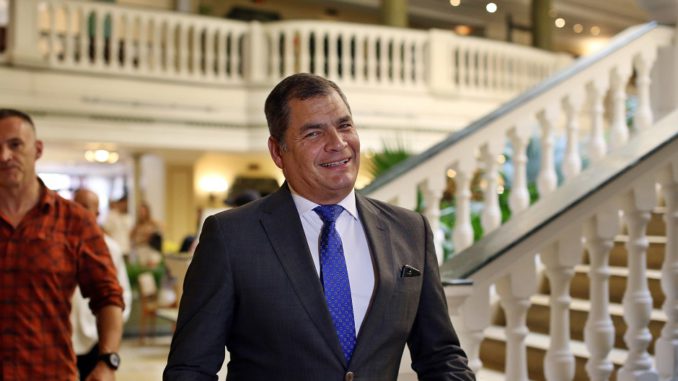 The former president of Ecuador, Rafael Correa, donated to his son a house in Quito, valued at $ 422,000, coinciding with his criminal ties in June to a case of alleged kidnapping of an opposition deputy, the newspaper El Comercio reported today.

According to this medium, the transfer of the property was requested on Wednesday June 18 through the Consulate of Ecuador in Belgium, where Correa resides since last summer.

In the process of the transfer of ownership, Correa and his wife, Anne Marie Malherbe, made a special power in favor of Pierina Correa, sister of the former president, with the purpose that she could carry out in Quito the notarization and management of the housing and register the change of property in the Municipality in favor of his nephew, who is a minor.

The transfer of property coincided with the application of precautionary measures against Correa by the so-called Balda Case, an attempt to kidnap in Colombia in 2012 from the ex legislator and opponent, Fernando Balda.

The case now awaits a decision of the National Court of Justice on whether or not to open a trial, in a legal proceeding in which Correa has been criminally linked and for which he could end up in prison.

During this evaluative phase of the process, the judicial authorities can prohibit the alienation of assets of an accused, including the donation of the dwelling.

Ecuador issued a petition in June to Interpol for the arrest and extradition of the former president after he disobeyed a court order requiring him to appear before the National Court of Justice, in Quito, every two weeks starting on July 2.

In that sense, the same media reported today that the national deputy director of the Judicial Police, Henry Herrera, dispatched the past day 12 an arrest warrant against Correa to all police units in the country.

The document asks all police chiefs to provide their agents with the corresponding provisions to proceed with their arrest, should they arrive in the country, which is unlikely because Correa himself has said he will not.

Next Monday the Criminal Chamber of Court will hold an appeal hearing filed by the defense of Correa in which it will be re-examined whether or not the order of precautionary arrest against him. (I)