Correa Has Threatened To Close Exporters That Do not Meet Requirements 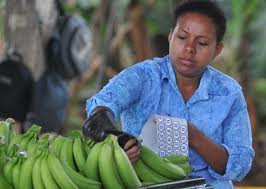 Ecuador’s president, Rafael Correa, informed yesterday that banana exports nationalized to prevent abuses committed against the producers of this product.

On his every Saturday media speech, made ​​this time in the city of Quevedo, Correa warned that the international banana market in Russia has declined due to severe winter in Russia and Libya by the complicated situation that is going through.

Ensures that exporters are not buying the fruit and have serious problems with producers, but the government said they insist on respecting the official price (5.50 dollars per crate) and they want to sell them by contracts so that the payments can be done through local banks.

The President added that the exporters that decide not to sign contracts are free to take their decision because nobody will be forced, but (exporters) “will not carry a single cluster if they do not have a contract”, he said. Correa threatened to close exporters who try to export without this requirement.

“(…) If we have to nationalize exports we will do it, partners, but let’s stop this shamelessness”, he said in his speech. On the other hand, he noted that to prevent abuse and to create a healthy competition he created a state exporter that “It guesses it was created already, but it is not working”.

Miley Cyrus Will Begin Her International Tour in Ecuador