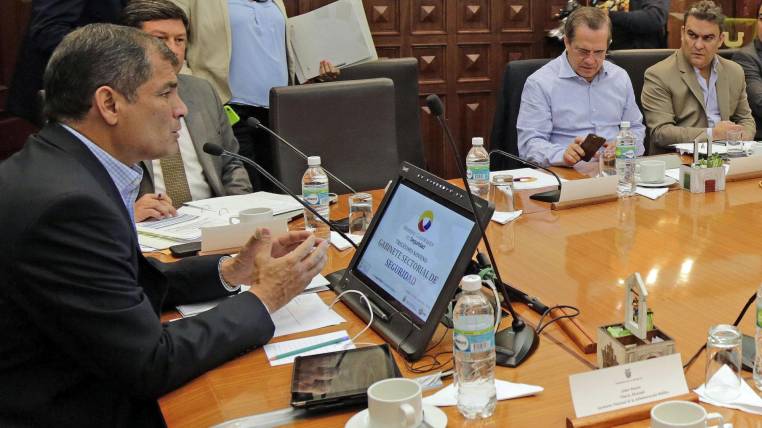 The attempted abduction of Fernando Balda, in 2012, evidenced one of the ways of operating the Internal Security Management Unit of the Presidency

The case is reaching former President Rafael Correa, whose connection to the file was requested on Friday by Prosecutor Paúl Pérez Reina.

On May 24, the former president acknowledged that he formed the Security Management Unit of the Presidency. It was August 2007 and Defense Minister Guadalupe Larriva had just died in an accident. Someone had said that his death had been planned.

According to the former president, complaints came every day. Most spoke of alleged attacks against their integrity. There were several sources, including a confession to a priest to whom they had said that “they had hired assassins to kill me and we ordered to investigate,” says Correa in his version of the Balda case.

One of these threats would have been represented by Balda, who denounced that the Senain spied on opponents.

Nor did he know of the existence of Raúl Chicaiza, the intelligence agent who received two checks for travel expenses in Colombia on the days of the kidnapping.

Chicaiza, the architect of the plagiarism, wrote to the president asking for legal aid. Correa did not know the letter. Rommy Vallejo, former Secretary of Intelligence and former Director of the Security Management Unit of the Presidency, said that in 2014 he responded by saying that he could not be helped. The former president says he did not know about the kidnapping, but Vallejo says that Correa asked him to find out if Balda was in Colombia.

Chicaiza underwent effective cooperation and revealed that the mission she fulfilled in Colombia was prepared from the highest levels. He even attached recordings, one of them with Pablo Romero, ex-director of the Senain, who was also linked to the case.

The retired Colonel Alberto Molina was one of the ones watched by Intelligence. He does not believe that Correa was unaware of the Balda case, because nothing in the country moved without his knowledge. “He created those units to ensure his safety,” he says.

The ex-director of Intelligence of the Army Mario Pazmiño believes that “the Security Management Unit of the Presidency meets the conditions of a political structure of persecution that was intended to meet the requirements of the president in relation to certain investigations that should be done in a reserved manner.” (I)

The Funka Fest looks to the future from the south