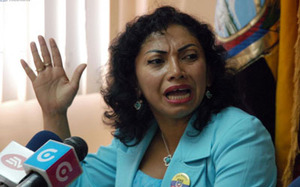 Juan Vizueta, the attorney of Mery Zamora, leader of MPD and current candidate for mayor of Portoviejo, reported that the First Criminal Court of Guayas confirmed the sentence of the official.

Zamora is accused of committing sabotage and terrorism during a student demonstration held along with the police uprising of September 30, 2010. The MPD leader faces a sentence of eight years in prison.

The Tribunal Board did not accept the defense appeal against the ruling of Zamora introduced last May by the 10th Criminal Court of Warranty, explained Vizueta, after the hearing to decide the appeal.

The procedure was accomplished for two hours and confidentially, by order of the judges Pedro Ortega, Marco Quimis and Helen Mantilla. The absence of Zamora was justified by his attorney, who said she had to attend activities in Portoviejo.