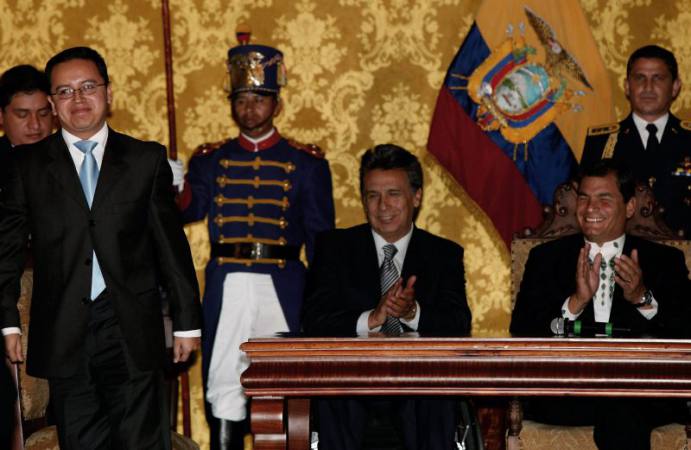 After six months of government, yesterday there was a significant tremble in the economic front of the country.

President Lenin Moreno thanked the services of Patricio Rivera, Diego Martínez and Wilson Mayorga, who until yesterday served as Economic Policy Councilor, representing the president before the Monetary Board and manager of the Development Bank, respectively.

The Finance Minister, Carlos de la Torre, announced in the morning that there would be changes in the economic front, since the evaluations had been made from the technical and political perspective, and it had been concluded that “some authorities need to be refreshed and the management of some spaces of economic management “.

A few hours later the exit was known, although Rivera clarified that he will occupy the position of superintendent of the Popular and Solidarity Economy, to which he was appointed by the Council of Citizen Participation in April 2017. “With the president we have considered it important that this is the moment to assume that dignity, “said Rivera and thanked the president for his confidence.

The departure of the government’s economic team, especially from Rivera and Martinez, had been a general demand from productive and political sectors, who considered that it was not possible for these people, who would have been responsible for a difficult current economic situation, to try to solve the problems with the same economic recipes of the old regime.

It is that in these six months, the solutions for the economic situation do not come to glimpse from any sector.

The Moreno government’s signals about economic policy were contradictory. At first he spoke of “the table was not served” and revealed the global amounts of what the country owes internally and externally. A few days ago a space for dialogue with businessmen was created through the Productive and Tax Advisory Council that led to the presentation of proposals. According to Walter Spurrier, director of “Análisis Semanal”, President Moreno in the first instance showed openness with the private sector, which meant a new moment for economic policy was foreseen. However, says the expert, all this was frustrated when, on November 1, the text of the Urgent Economic Law that is discussed in the Assembly became known.

The bewilderment is also generated from the official area. Assemblyman Pabel Muñoz recognizes that there is no structured vision and that they do not have a conceptual umbrella on the economic issue.

On May 28, four days after the inauguration, Minister De la Torre had mentioned that “the engine of the economy will be the productive sector”.

On November 1, the Reactivation Law and the budget proforma were presented, to be approved.

The high demand for banknotes in the Ecuadorian economy led the Government to propose a strategy together with banking to promote the greater use of electronic payment methods. In this context, it was agreed that the Banco Central should leave aside the project for the use of electronic money, which was not consolidated. Despite this, in six months, the legal changes necessary for the bank to take charge have not been achieved. The law that contains the changes and that is dealt with in the Assembly, does not convince or the bank itself, which has requested the withdrawal of the same. Additionally, a correísta sector of Alianza PAIS has requested that the electronic money be left in the Banco Central.

Repeal of law, on request the elimination of the added value Law, which according to the construction sector has deepened the contraction of the activity, depends on the popular consultation that has been called by the Government, but which is still in the process of being approved.

For Enrique Pita, president of the Chamber of Construction of Guayaquil, it is important that it has been included. For the trade union leader, the announcement of the decision generated a better expectation in the sector. But this has not been enough to reactivate it.

For Pita, the repeal of the law would not be either, especially since investing requires an adequate climate and this does not happen with the urgent bill.

Inherited problem.
The oil company has been one of the most complex areas that the current Government received as a legacy. This is due to low prices, as well as corruption cases. On the subject, Fernando Santos Alvite, former Minister of Energy, highlights as positive the transparency with which the sector has been handled by making known the true state of several works. He considers that the Government will still have a hard time getting him out of the paralysis. At the moment production is not increased, there are important debts and long-term contracts have not been renegotiated. It has been six months of analysis and little action, he says. (I)