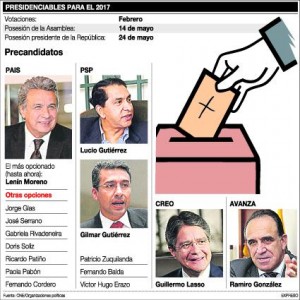 The withdrawal, for now, of president Rafael Correa to run for president in 2017, opens the succession race to a position that still has not any defined contender when a little more than a year is left for elections.

For now, there is only one name that seems clear. Guillermo Lasso reiterated yesterday in an interview with Ecuavisa: “I will seek the nomination of the CREO movement to be a candidate for president in 2017.” He is the only one of the main opposition leaders who has decidedly postulated.

The best positioned seems to be the former vice president Lenin Moreno, who has not spoken since his name came out to light last week. He, according Perfiles de Opinion, has a positive rating of 71%.

And Correa had also nominated Vice President Jorge Glas and Interior Minister José Serrano. Yesterday, he added three more names to the list in which two women appear: the president of the Assembly, Gabriela Rivadeneira, and the secretary general of the movement, Doris Soliz, and another minister, Foreign Minister Ricardo Patiño.

But the PAIS party is not the only group that shuffles several names. That coincides with the Patriotic Society Party (PSP). In that political group there are, o far, five candidates for the presidency: the brothers Lucio and Gilmar Gutierrez, the former Foreign Minister Patricio Zuquilanda, Fernando Balda and Victor Hugo Erazo.

According to Gilmar Gutierrez, president of the PSP, at the party convention -in March 2016- their candidate will be nominated.

The Avanza party has less trouble. For them the choice is clear: Ramiro Gonzalez, president of IESS and former Minister of Industrywill be the anointed one. Bayron Pacheco, assemblyman of the party, said that -when the moment comes- the party will propose him to run for the presidency.