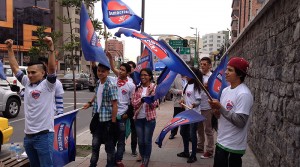 Marcelo Larrea, President of the National Federation of Journalists, along with activists of the Democracia Sí (Democracy Yes) movement and former government officials, filed an prior opinion request to the Constitutional Court on seven questions for a popular consultation. “We want to protect and ratify the Sections of the Constitution because these are seriously threatened by the amendments of Alianza PAIS. Damaging the democratic and republican rights,” he said.

According to Democracia Sí, integrated by 16 local and three national movements, a consultation will ensure the permanence of the constitutional rules, which were approved by the Constituent Assembly and confirmed by the vote of the people. “Our query changes the legal procedure. We resort to the Constitutional Court to order that the sections, already in force in the Constitution, are notmodified,” said Diego Borja.

The first question is about indefinite reelection, to which Democracia Sí, opposes. “The Alianza PAIS amendment aims to establish a regime of perpetual election of the President. Something unacceptable in the history of the nation. Juan José Flores and Garcia Moreno tried the same and that meant their political grave,” said Gustavo Larrea.

Ecuador replied to Germany about the attempted visit to the country