Drug that left the country is detected 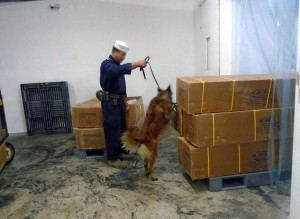 A shipment of 24 tons of fish, carrying concealed drug, was detained in a port of the Mexican state of Yucatan.

The shipment was in two containers that had arrived in a Liberian vessel, which set sail from the port of Guayaquil.

The alkaloid was discovered after a raid conducted by the Secretary of the Navy of Mexico and the Tax Administration Service.

Yucatan media reported that swordfish were filled with drugs. 750 kilos were preliminarily accounted, although authorities presume of a greater cargo.

As part of the procedure cargo samples were taken for laboratory testing, which concluded it was cocaine.

Mexican authorities had suspected that within the merchant ship drug was being transported, so they proceeded to perform the inspection.

Information from the Navy Secretariat of Mexico refers that the fish contaminated with the alkaloid was insured in the fiscal area of the Container Terminal of Yucatan. Until yesterday Antinarcotic authorities of Ecuador did not rule on this seizure.