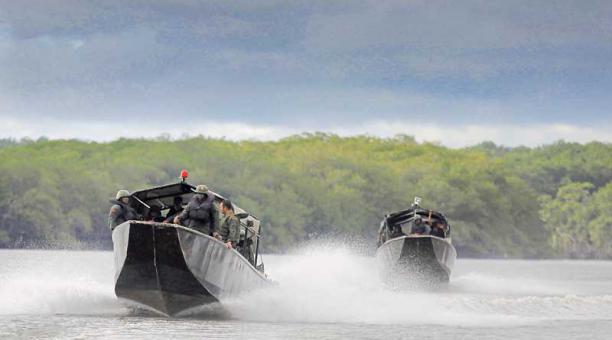 Palma Real is an Ecuadorian area where boats loaded with cocaine blocks bound for Mexico and the United States have been detected.

21 soldiers from the Battalion of Marines Number 11 are in charge of reviewing the route that departs from San Lorenzo, an Esmeraldas county that borders Nariño, Colombia, on the northern border. The boats that carry the soldiers reach speeds of between 100 to 120 kilometers per hour and it takes 20 minutes to reach Palma Real.

Navy Commander Angel Pacheco, in charge of the Marine Corps Battalion Number 11 of San Lorenzo (Bimlor), told Daily El Comercio that cocaine, fuel, weapons and explosives are the main threats in the area.

One of the routes where the drug enters is San Lorenzo. From this point, they move it by land to the coast (Manabí and Guayas provinces) and embark it to the US, from the ports. These data are corroborated by Pacheco, and also known by the police. A week ago, narcotics agents executed the Rising Sun Operation in those two provinces and captured nine suspects investigated for shipping cocaine from ports in Guayaquil and Manta. In that raid, investigatorsfound USD 17 million hidden in coasters.

The World Book Day, a celebration for people of all ages

Ñapis, an innovative toy made in Ecuador