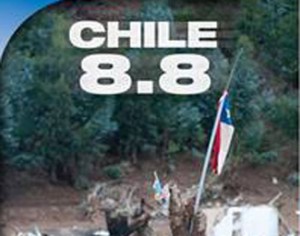 The 8.8 magnitude earthquake occurred in Chile, in February this year, inspired the creation of the movie “03.34,” (time at which the catastrophe began) which will premiere in 2011, its producer Martin Rogers affirmed during a press conference on Saturday.

“This is a never been done movie, it has a high level of production and the effects are incredible,” said Rogers, who also said they expect to raise more than $ 2 million that would be donated to educational institutions affected by the earthquake.

The film focuses on three fictional characters that live the natural disaster in southern Chile and Santiago, with special emphasis on the events in Dichato town, one of the most affected.

The movie “3:34” was directed by Chilean Juan Pablo Ternicier and was shooted with local actors and in real sceneries. The production of the motion picture—which will be released on February 27, 2011 in Dichato—had a budget of $ 1.4 million.