The Governments of Ecuador and the United States this morning signed a memorandum of understanding to articulate a technical cooperation that allows “mitigating the effects of regressive erosion in the Coca River and protecting the water catchment works of the Coca Codo Sinclair hydroelectric plant”. The largest hydroelectric plant in the country, with 1,500 MW of installed power, and which covers the demand of 30% of electrical energy for Ecuadorians, could be at risk, as this natural phenomenon has advanced towards capture works. Currently, this erosion has been stopped since July 20, 7.9 km from the catchment works. 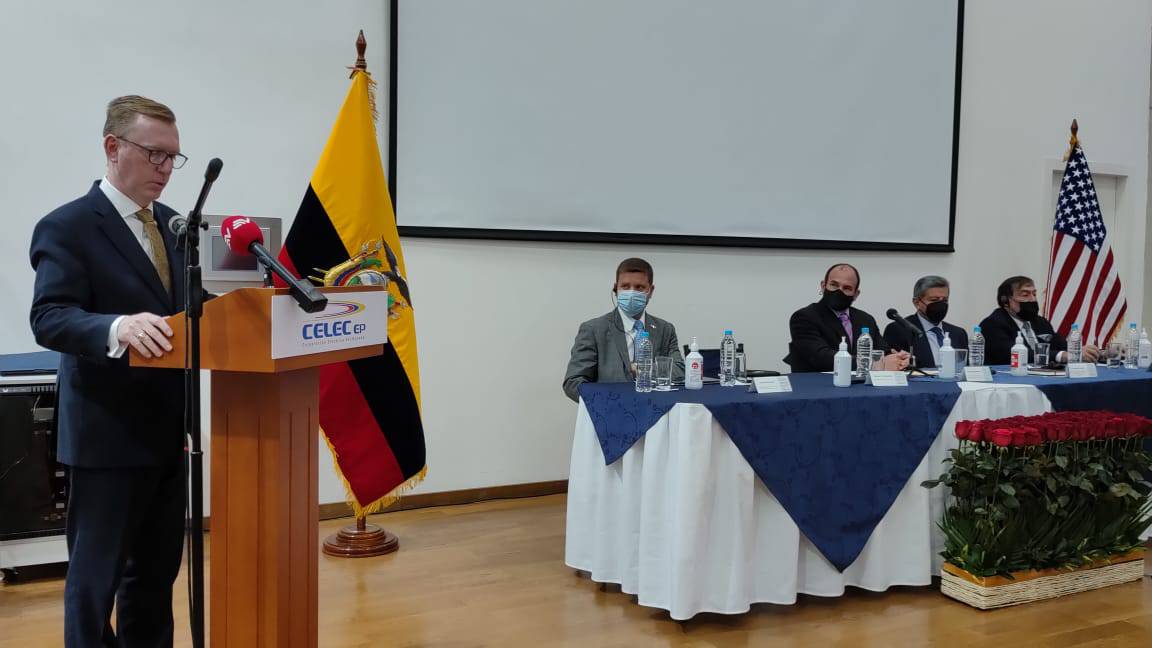 Celec and the US Corps of Engineers signed a memorandum of understanding to address regressive erosion in the Coca River sector.

The document was signed in a formal act. The CEO of Celec EP, Gonzalo Uquillas Vallejo, signed for Ecuador, and for the United States, the representative of the United States Army Corps of Engineers, Adriel McConnell. As witnesses of honor, the agreement was also signed by the Vice Minister of Electricity and Renewable Energy (s) Patricio Villavicencio, and the United States Ambassador to Ecuador, Michael J. Fitzpatrick.

The cooperation will be developed for a period of five years counted from the subscription. “We will do our best to find the best solutions for the benefit of the country,” emphasized Adriel McConnell, representative of the United States Army Corps of Engineers (Usace). He added that the entity has experience in treating this type of phenomenon.

Within the agreements, as explained by Uquillas, the construction of the physical model of the protection works is proposed, which will allow adjusting the behavior of the rigid screens that will be built in the riverbed, in the face of the effect of regressive erosion. The construction of these screens, known as Jet Grouting, was a recommendation from an internationally renowned consulting company to halt the erosion process, and they will be located 1.2 km downstream from the hydroelectric catchment works. The study of the physical model of the river will be carried out in the hydraulic laboratories of the Usace, in Vicksburg (Mississippi).

The document explains that international cooperation will be ” in technical assistance to develop studies, designs and execution of works, under the technical support of experts in the field, as well as to implement joint actions to face the process of regressive erosion.” Activities will also be developed that promote the collaborative and mutual exchange of scientific knowledge and experience in the following topics: river engineering technologies, sedimentation and dredging, river erosion and slope stability, as well as physical modeling and experimentation.

The deputy deputy minister, Patricio Villavicencio, commented that the protection of the catchment works of the Coca Codo Sinclair hydroelectric plant is a priority for the national government, and it is for this reason that no effort has been spared to carry out all technical tasks in a manner.

In this regard, the manager of Celec, Gonzalo Uquillas, recalled that the problem of regressive erosion and progressive sedimentation on the scale in which it has been occurring in the Coca River, after the collapse of the San Rafael waterfall, is unprecedented. Worldwide. “For this reason, technical advice from experts worldwide is essential, so that Celec EP, through the Rio Coca Executive Commission (CERC), develops studies, designs and execution of works, under the technical support of experts in the field, and thus make the best decisions regarding the alternatives to study and execute”.

For his part, the United States ambassador in Quito, Michael J. Fitzpatrick, highlighted that when the erosion in the Coca River began, his government activated a response group, in May of last year, in order to facilitate and channel processes of cooperation to face this phenomenon. ” The actions carried out lead us to the signing of the memorandum of understanding, which is the result of a path of trust between the governments, through the United States Army Corps of Engineers and the Celec team,” he said.