The Prosecutor’s Office presented eight elements of conviction for the reformulation of charges against the Swedish Ola Bini and the Ecuadorian Marco Argüello. The new crime investigated is unauthorized access to computer and telematic systems.

Judge Yadira Proaño accepted that request, this Thursday, August 29, 2019. That crime, typified in article 234 of the Organic Integral Criminal Code (Coip), has a prison sentence of three to five years; that is, the same time in prison of the previous crime investigated, related to attacks against computer systems. 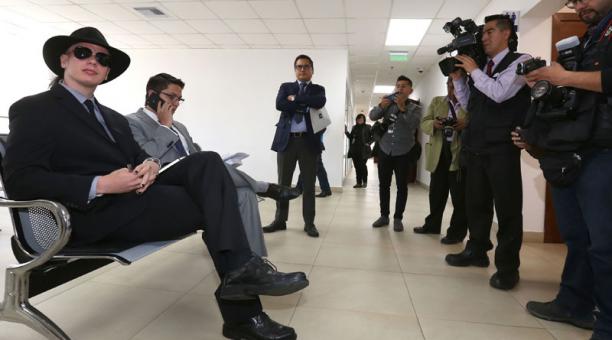 Among the new elements presented by the Prosecutor’s Office, the afternoon of this Thursday, August 29, 2019, are the records of private hearings in which information extracted from electronic devices materialized, including an iPhone cell phone.

Also, reports from the National Telecommunications Corporation (CNT) in which it is determined that Ola Bini would have accessed a private LAN network of that entity, which supported Petroecuador and the former Secretary of Intelligence (Senain). Prosecutor Édgar Chavez said the information was extracted last week by technological experts from Criminalistics of the National Police.

Other elements refer to a Telconet trade with the CNT system logbook. In this diligence reference was made to the image of a warning not to enter a prohibited site and in which Ola Bini was recorded.

For the Prosecutor’s Office it was important to relate the Swede to WikiLeaks and at the hearing he pointed out as an element of conviction that there are videos in which Bini is seen wearing a shirt of that organization. The National Telecommunications Corporation (CNT) filed a private complaint and considers itself the victim of both defendants. That is why, this afternoon, the request of the Prosecutor’s Office was paved.

The hearing was scheduled to settle at 12:00 this Thursday; however, for lack of an interpreter he had to be delayed. At 2:30 pm he was reinstated and Ola Bini had a Swedish translation. His defense said the Prosecutor’s Office has not been able to determine an illegal Bini action. In addition, he rejected that the reformulation has been approved two days after the end of the fiscal investigation (investigation) stage.

Prosecutor filed a private accusation against Rafael Correa, Jorge Glas, Alexis Mera and other former officials, in the 2012-2016 Bribe Cases

The Ministry of Public Health provides education and health services to 264,436 Venezuelans