Ecuador is among the countries with fewer holidays in the world 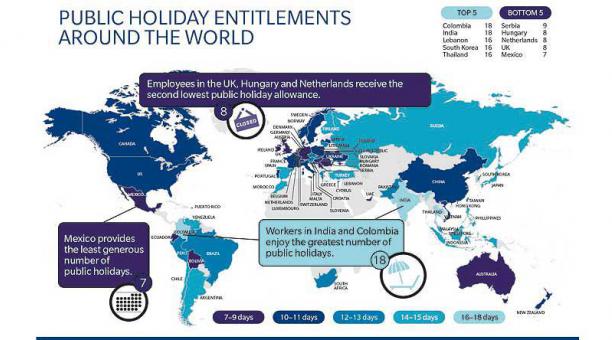 Until November 18, 2016, people of Ecuador have already lived eight holiday days or days of mandatory rest. This, without counting the bridge days or the weekends, as it happened with the past five days for the Day of the Dead and the Independence of Cuenca (from 2 to 6 November), which included a bridge day and a weekend. With this, the country is among the countries of the region that have fewer days of holiday, being located before Mexico, that hardly counts on seven days of holiday and make it the country with less time of holiday in the American continent. This information was collected by the international polling firm Mercer that produced a ranking in 2014, by continent, of the countries that have the most holidays per year worldwide.

According to these data, India (in the Asian continent) and Colombia (in South America) are the countries with the most public holidays (both with 18 days a year). In America, Colombia is followed by countries such as Chile and Argentina (15 days), Brazil (12), Canada (11) and the United States (10). In Europe, Finland is the country with the most days of rest (15), followed by Spain (14), while Hungary and the United Kingdom only have eight a year.
In the country is planned a first debate in the National Assembly that could be held next week to discuss the draft reforms to the Labor Code and the Public Service Act, which involves changes in the national calendar of public holidays. If the change is approved, holiday days that coincide with weekends would be transferred to Friday or Monday.

Tax collection will fall by $ 700 million