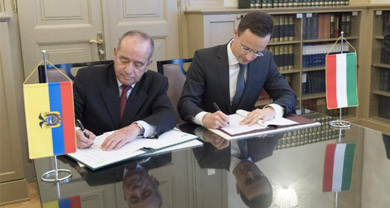 Ecuador participated in the III Latin America Hungary Forum that took place in Budapest, from November 15 to 17, 2017, in which high officials of the Ecuadorian government participated. Within the framework of the event, memorandums of understanding were signed and meetings were held with senior representatives of the Hungarian government, which allowed the promotion of the exportable offer and the strengthening of the cooperation of both countries.

The Ecuadorian delegation was chaired by the Minister of Telecommunications and the Information Society, Guillermo León Santacruz, who presented a paper at the opening session and referred to the relevance of ICTs in Ecuador, the transfer of technological capabilities and bilateral cooperation.

In the framework of his visit, Minister Guillermo León held a working meeting with the Minister of Foreign Affairs and Trade of Hungary, Péter Szijjártó, an opportunity that served for the signing of the Memorandum of Understanding for Cooperation on Hydrocarbons. He also held bilateral meetings with others, expanding possibilities for cooperation between the two countries.

Also, the Undersecretary of North America and Europe of the Foreign Ministry of Ecuador, Carlos Játiva, held on November 16 a bilateral meeting with the Secretary of State for the Opening to the South of the Ministry of Foreign Affairs and Trade of Hungary, Szilvester Bus, to review the bilateral agenda, verify the progress of the cooperation mechanisms that have intensified in recent years, prepare the next high-level meetings, as well as the reactivation of the bilateral political consultations. These meetings also included the participation of the Ecuadorian ambassador in Hungary, María del Carmen González and the ambassador of Hungary in Ecuador, Edit Bucsi-Szabó.

Within the framework of the III Hungary-Latin America Forum, the Memorandum of Understanding of collaboration between the Drinking Water Company of Budapest and the Potable Water Company of the Metropolitan District of Quito was also signed.

On the other hand, the Ecuadorian delegation participated in the Trade Promotion Forum held at the Hungarian House of Commerce on November 16, which included the participation of Álvaro Maldonado, secretary of Productive Development and Competitiveness of the Municipality of Quito, Rosa Nelly Castro, Counselor of the Commercial Office of Ecuador in Hamburg and the Honorary Consul of Ecuador in Hungary, Iván Nyíri, who presented the project portfolio of the Municipality, the commercial opportunities of Ecuador, the experiences of commercial exchange and the positioning of Ecuadorian products in Hungary and the continent.

In the Hungarian House of Commerce, the Ecuadorian roses donated by the Ecuadorian company Guaisa were shown, a tasting of chocolates, chifles and snacks from Ecuador was offered.

The event was also favorable for the Ecuadorian delegation to hold bilateral meetings with its Hungarian counterparts and the representatives of the business agencies of the member countries of the Viségrad Group (Poland, Czech Republic, Slovakia and Hungary), as well as to promote the exportable offer of Ecuador and expand commercial cooperation (I)