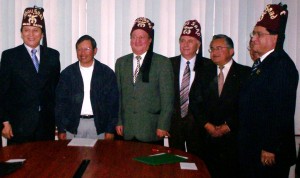 The Word shriners translate to Sanctuary, but the name was really chosen over 145 years. The shriners is a mistical Arabian order of a sanctuary, and the letters that identify it are AAONMS, which mean the “Ancient Arabic Order of the Mystic Shrine.”

The logo of the company consists on the traditional scimitar blade, because the sword is used during the ceremonies for new initiates, while the half Moon and the Sphinx are associated with the mysticism of the order. This inspiration came when one of its members, Dr. Flemming, attended a ceremony in Paris in1871; the Ambassador decorated the meeting place with an Arab theme. When Flemming returned to New York, he began to wear the red hat that was used in the ancient times of Morocco. These items were used to attract children and in some way entertain them while giving them a better quality of life.

Shriners in Ecuador gathered on 2007 to recruit new members, but the organization was recognized on January 18 of 2008. Their founder is  Dr. Cesar Mora and many other professionals also belong to this philanthropic organization. The Ecuador Shriners Club has 20 official members. The requisite to become a shriner is to have the will to help, that is what they look for in the candidates, a person whose willing is to share time for the cause and with energy to help children in need. So far the organization has healed 20 children with serious sickness, which have been treated in several different and expensive hospitals.

The shriners fraternity began in the United States, and afterwards it expanded to Canada, Mexico, Central America, and South America like Colombia, Venezuela, and Ecuador among others. They also have members on Japan, and Europe.

Shriners attend any person. The same attention is given to poor or rich people. They focus mainly on scoliosis, severe burns among others however, the afflicted can be attended until the age of 18, and in some exceptional cases until 21 years old. The afflicted must be fully diagnosed, they also receive three types of help: child orthopaedics, spine surgeries, and those that suffered extreme burns. People that contact shriners do so because they received the information from someone else, the Web site has also increased the number of cases, and it makes easier to fill the application form so the entity can began the process and help the child.

Ecuador Shriners Club does not receive a single cent for all the help they give to children, and they do not ask the parents for money. All they ask are previous exams the afflicted has received so they know the real condition of the patient. Afterwards if the case is approved by the hospital in USA they send a letter so that the candidate can obtain a visa for its treatment.

Any people that wish to be treated must have a disease or serious injury be it scoliosis, back problems, bifida spine, and they must have an Ecuadorian doctor diagnose about the patient so we can start the application process, and send it to the United States, since they are the only ones that will approve the form.

Filantropic aid for Ecuador: End Of The Year Summary