Ecuador, the Latin American country that hosts the most refugees 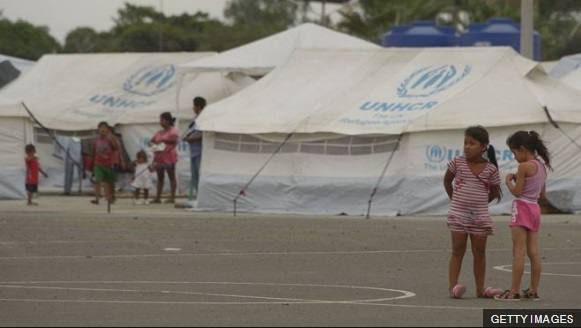 It is the country in Latin America that receives the most refugees, but it is also considered one of the world leaders in relation to the treatment granted to those who grant that status.

Ecuador is well below the figure of 1,352,560 people in Pakistan, the country with the largest number of refugees in the world, but it is also well above the 9,689 that are in Brazil, according to figures in the Global Trends report the UN Agency for Refugees (UNHCR).

The South American country hosts a total of 60,524 recognized refugees within its borders, a figure that exceeds the sum of the people who are in that situation in all other Latin American countries combined.

“Latin America has always had a tradition of refuge, of asylum, of welcoming people who have to leave their countries, Ecuador continues that established tradition of granting asylum to those who need it,” she tells BBC Mundo María Clara Martín, representative of UNHCR in Ecuador.

Martín believes that this country applies numerous good practices that could serve as an example not only to countries in the region but also to the rest of the world.

How is it explained that being a country with less than 20 million inhabitants, it receives more refugees than much larger ones like Brazil and Mexico?.

“Until a few years ago, the situation in Latin America that generated the most displacement was that of Colombia, and the refugees mostly go to bordering countries,” she says.

As a result, 98% of the refugees in Ecuador are of Colombian nationality.

“This is a historical figure that has been maintained since 1989,” says the expert, noting that in the remaining 2% there are Afghans, Syrians, Yemenites, Eritreans, Cubans, Venezuelans, Iranians and Iraqis, among others.

Beyond sharing the border with a State from which a large number of asylees come, there are other reasons why Ecuador stands out in this area.

Martin points out that Ecuadorians are sensitive to the issue of refuge because they know the situation of uprooting, after around the year 2000 they left massively abroad.

The number of recognized refugees in Ecuador is greater than that of those who are in that situation throughout Latin America.

This sensitivity has now been translated into the Human Mobility Law, “one of the most advanced in the world”, approved in January 2017.

“This standard materializes and makes this tradition of asylum much more effective because it places it in a legal framework that confers rights, documentation and offers durable solutions to refugees, who can be nationalized after having spent three years in Ecuador,” says Martín .

It explains that those who are admitted in Ecuador under this condition have the right to an identity card that is the same as the one that has a legal resident in the country and, even, any Ecuadorian.

“This obviously reduces discrimination but also eliminates one of the obstacles that refugees had before to access different services and even work, before they had a refugee identification but not all employers recognized it,” says Martín.

The expert praises some fundamental principles contained in this norm, such as the right to family unity and non-criminalization due to causes of human mobility.

“These are good practices that Ecuador can export to the world,” says Martín. (I)