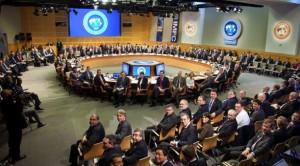 After the reopening of the fiscal accounts to the International Monetary Fund (IMF), the economic authorities of the country have been in Washington paving the way to comply with the consultations of the Article IV of the organism.

“This important step will allow the IMF staff to restore the interaction with the Ecuadorian authorities to analyze the evolution of the national economy and the medium-term prospects”, said the Deputy Managing Director of the entity Min Zhu.

The message was welcomed by investors. According to Finance Minister Fausto Herrera, yesterday, USD 2 000 million in bonds could be placed (10-year term and a coupon of 7.95%), although U.S. $ 5 000 million could be achieved before the interest of 200 institutional investors and private banks in the United States, Europe and Asia.