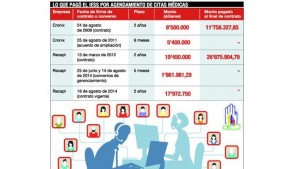 In August of this year expired the contract for the assignment of medical appointments through a call center (call center), the Ecuadorian Social Security Institute (IESS) will have paid $ 63’866.963,93 for that service that was used for seven years.

Two companies have been in charge of the provision in all that time, under the modalities of contract extension agreement and management agreements. Recruitment processes have been the subject of four audits by the General Comptroller of the State.

Service call center, designed to optimize care users IESS, began in 2009. But his operation leaves a trail of scandals cases that have ended up in the courts.

The first contract was signed on August 24, 2009, for $ 8’500.000. The goal was the service of a telephone call center for medical care and scheduling appointments.

These irregular practices were also detected by the Comptroller in the first of two special examinations carried out the recruitment process and performance of the contract. In 2013, the watchdog issued a report with evidence of criminal responsibility, which was filed after it was sent to the prosecutor.