An Ecuadorian merchants association in Madrid denouncement on Tuesday the irregular use of police force against a group of Ecuadorian in a Madrid´s park. 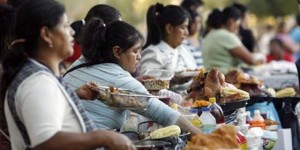 The event took place in Lake of the Casa de Campo where every Sunday hundreds of Latin America immigrants gather to share with friends and families. The Lake Country House is one of the green lungs and leisure on the district of Madrid.

According the Spain authorities the area brings a hundred merchants offering products and services in contravention with the city rules.

Four people were arrested in the collision when the municipal police, who then proceeded to seize food and other supplies of the Ecuadorians.

In its statement, the Ecuadorian merchants association and Musical Culture Ecuadorian in Spain rejected “the use of police brutality, which affected the women and children of the peaceful citizens.”

The association pointed out that the Ecuadorian immigrants have turned to selling products on the street due to “lack of employment in the regular market, and the economic crisis which has particularly affected the foreign population living in Spain.”

It also holds meetings with the National Secretariat for Migrants (SENAMI) of Ecuador, who gave his support for obtaining food-handling license for 234 people who carried out this activity in the Casa de Campo and other districts of Madrid.

5,2 Earthquake Strikes Chile With No Victims Reported Yet