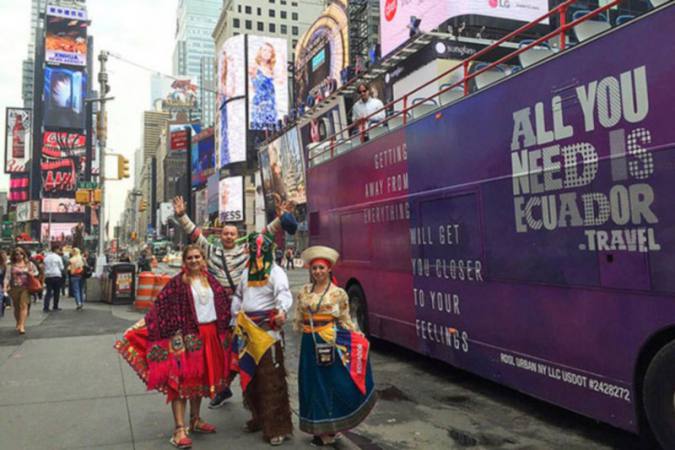 Four years after the campaign All You Need is Ecuador, which started the previous regime, the Ministry of Tourism considers that it met its goal.

Last July, the current government already analyzed that tourist promotion campaign that began in April 2014 simultaneously in 19 cities in the world, 7 in Ecuador. The objective was to position the country as a tourist destination.

At the launch of the Ecuador is Love campaign, on Wednesday, which seeks to develop the wedding industry, Aldo Luzi, undersecretary of Markets, Investments and International Relations, said that it fulfilled its purpose and now it is necessary to promote segments specific as romance and weddings, congresses and conventions, wellness and spa, religious, adventure and nature.

According to Luzi, All You Need is Ecuador, which started as a promotional campaign and became a brand, will continue to be used but will be phased out.

And he gives her reason: that the name of Ecuador should have more relevance for its positioning. “The 10 countries that carry the most tourists are the name of the country.”

Another argument is that it has to be associated with something specific such as history, cultural past, and as an example that Guatemala is promoted for its Mayan temples.

She said that All You Need is Ecuador leveraged in traditional media such as radio, television and print media but not online or specialized portals.

Communications from the Ministry of Tourism of 2014 reported that Facebook, Twitter, YouTube, Google, Despegar.com, TripAdvisor and Expidia were some of the digital media in which the campaign was scheduled.

In addition, it revolved around the concept that in the country everything is close as in no other place in the world.

Former Minister of Tourism Fernando Alvarado said that if the Government considers that the campaign has already met its goal, they could be right, given that every campaign has its cycle. “The definition of time is set by the new Tourism Minister, as is their right and function  a publication calendar is made, a ladder of impacts and the results are those that command temporality,” added Alvarado.

“The idea is to change the brand and start something fresh and new,” Luzi said. They have submitted proposals to the minister of the sector, Enrique Ponce de León. The owner of Tourism said that it is appropriate not only to advertise as a country that loves life or as a country in which everything we need we will find, “but with product and this is a product”, referring to the Ecuador campaign is Love

“Maybe use the brand Ecuador loves life as a tourist brand and land in each segment,” Luzi said.

A decision would be finalized until the end of the year. (I)