The race for functioning electric cars ended with its technological success however one problem remains: their price. General Motors´ Volt has a cost of $41,000. These prices will force normal motorists to adopt new manufacturing measures. 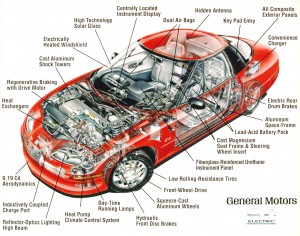 Carmakers now have to create vehicles that match the standards of petrol-driven ones. For the commercialization of these vehicles, a number of factors are taken in consideration, increased speed and range is one of them, but in most cases the technology is not available yet. The Volt, for example, is provided with an extra petrol-powered generator to run the car when its battery of 65km (40 mile) range has been exceeded.

A firm in the South of Korea, CT&T has taken a different turn. Their main business used to be making electric golf carts, now its manufacturing range of battery-powered cars. These vehicles are suited for low-speed and short-distance urban driving. The flagship model called the eZone is being promoted for the elderly and to those housewives who make the daily school run. Its range is of 100km, it has a 70kph acceleration if one put its foot down.

This electric vehicle is the only low speed car that has passed international front and side crash tests allowing its general sale. In Europe the launch will take place any day now, with a starting price that ranges from $8,000 to $16,000. Meanwhile CT&T plans to introduce the eZone into Hawaii, since it’s a land where journeys are short, in a period of no less than 2 years. When the local factory is working. The South Korean enterprise says that 1,500km of urban driving which is a month’s worth will cost $7 in electricity bills.

The power for the full 100km depends on the charges used, new versions will run on lithium-polymer batteries. A cheaper version uses lead-acid ones, which is half of the power. CT&T says that the standard urban drivers travel a mere distance of 40-50km a day. Meaning that users of the lead-acid batteries will be able to make it home for an overnight recharge.

However, critics of electric cars debate its viability depends on government subsidies. This is due to the simple technology that CT&T use, since the South Korean government has and demonstrated its lack of funding control for electric car drivers.