Employers get relative advances in the approval of the Partnerships Law 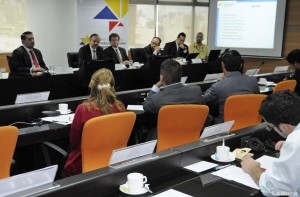 Meetings between representatives of the public and private sector.

The Partnerships Law is not a gold coin for members of the ruling party. Criticism of the proposal, which raises partnerships between the public and private sectors, continued until the drafting of the report for the second debate. Yesterday, the differences caused did not allow the approval of a final document. The text will be voted today.

The Commission on Economic Development addressed the issue in the afternoon. After an accelerated treatment, lawmakers raised the relative inclusion of the private sector and financial amnesties for different sectors.

Remission of interest and penalties of the debts in the Ecuadorian Social Security Institute (IESS) is a case. More than 162,000 employers will benefit from the amnesty of 99% of the charges. Of these, 28% are in the Guayas province.

Richard Espinosa, president of the Board of IESS, forwarded the need of the private sector to the Commission. Lidice Larrea, president of the legislative table, looked favorably on the initiative. The expectation is to solve debts of around $ 502 million.