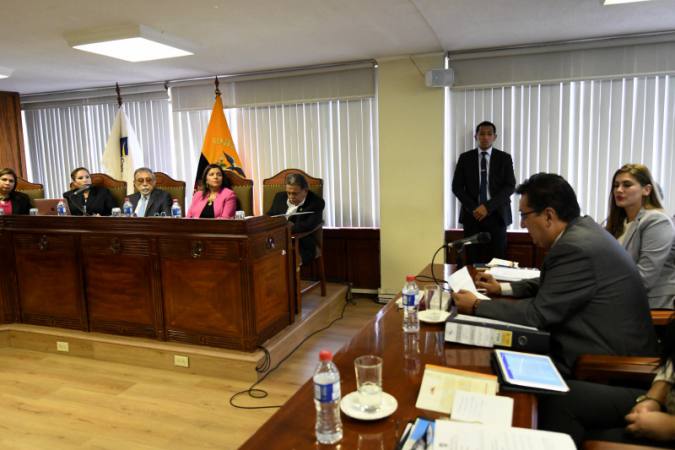 At the beginning of April, the Constitutional Court (CC) could issue its ruling on the unconstitutionality demands of the Law for Labor Justice, promoted by trade union groups that are affected by their rights by setting the limit to the payment of profits, and the rules that were established for the payment of the State of contributions for pensions to the Social Security Institute (IESS).

The complaints were filed in May 2015 against articles 15, 63, 65, 68.1, 69, and the Single General Provision of the standard; and yesterday, almost three years later, the nine constitutional judges received them in a second hearing, before issuing a sentence.

Rafael Oyarte, sponsor of the workers of the telephone companies, reminded the judges that in the application there is a request for precautionary measures that has not been processed. Therefore, he asked that if they do not give their opinion until April 15 (the date of payment of utilities), the rule can not be applied.

The jurists Joaquín Viteri and Víctor Granda represented the Unitary Workers Front (FUT) in the diligence. The first criticized that the law violates the right to collective bargaining. And he considered that “setting limits” to the payment of profits is a “discriminatory attitude” against employees, because “entrepreneurs do not do anything”. “It is a sign of pettiness. The Court can amend and oblige workers to be returned what they were not paid in the first year of application of the law, “he proposed

Regarding the provision that states that the payment of Social Security pensions will be guaranteed only when he does not have the resources to cover them, Viteri asked the Court to “save social security, because the sentence will be to save future generations.”

Michelle Pineda, delegate of the Presidency, exhorted the CC to reject the request and to “modulate the judgment on the utilities”.

The sentencing project was in the hands of Judge Francisco Butiná, but the resolution will be dictated by the Plenary.

The public servants who are under the category of occasional contract must go through a merit contest, announced the Minister of Labor, Raúl Ledesma. He said that in this month all the ministries of the Executive Function must present a plan of ‘job profile’ so that “all occasional contracts become indefinite.” “You’re not going to fire anyone, it’s going to be regularized,” the official said Monday. (I)