Expiration date of pre-trial detention in the Odebrecht case, and no date for upcoming trial. 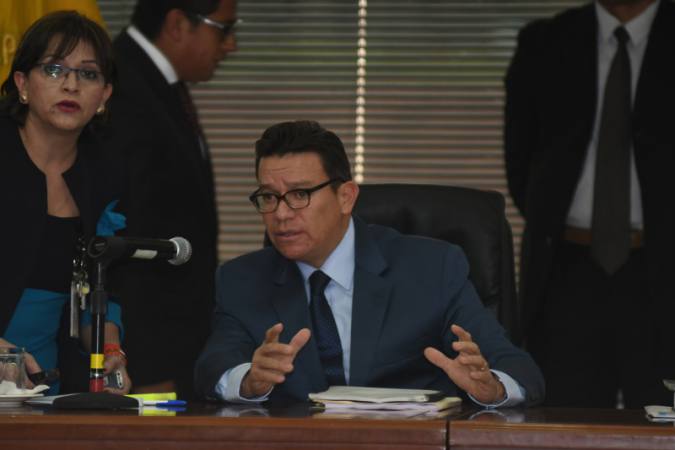 Once the trial call was issued against the thirteen defendants accused of illicit association in the Odebrecht case, some lawyers in this process believe  that there could be between eight and ten days, delay  date for the trial hearing, which will be defined by the Criminal Court of the National Court of Justice that takes up the case.

Aníbal Quinde, attorney for Ricardo Rivera, one of the defendants in this case, along with his uncle, Vice President Jorge Glas, believes that if the times to be fulfilled are added, the parties cannot be seated in a hearing before November 27.

According to him, until today must wait for the enforcement of the appeal to trial resolved by Judge Miguel Jurado, last Tuesday; then the expansion and clarification resources that are submitted will have to be resolved.

Quinde expected the written resolution of the jury to file the appeal, but yesterday said that it will do so based on the oral statement of the judge.

Rivera’s lawyer argues that once this is resolved, the case will be transferred to the Criminal Court so that the Tribunal will make a call for a hearing that, in his opinion, must be three or four days in advance. “due the nature and exigency of the case”.

Ten days is the estimated deadline for him to know the date and time for the trial hearing in this case, according to Julio César Sarango, César Montúfar’s defense, Jorge Glas’s private accuser in this process.

For Sarango, these times end up being relevant, because in the absence of a sentence, there is the expiration of the preventive detention of four of the thirteen defendants in the degree of authors: Rivera, José T., Gustavo M. and Carlos V. They were arrested on June 2 and the following day they were charged.

Article 541 of the Ecuadorian Criminal Code argues that preventive detention may not exceed six months in crimes punishable by a penalty of imprisonment of more than five years. The illicit association provides for a penalty of three to five years and is a crime that cannot be judged in absence.

For Quinde it is clear that if the trial hearing in this case goes beyond December 2, his client would remain rooted in the process, but already released. He believes that this should occur, unless the Office of the Prosecutor initiates some other type of process for which they want to issue a new preventive prison.

Sarango recognizes that the expiration of the preventive detention, if there is no sentence, is a constitutional guarantee that must be fulfilled. Despite this, it says that the judges have not been agile in resolving and this delay gives the possibility that these people remain at liberty and “cannot appear in court until it prescribes the crime pursued.”

In the Ecuadorian Criminal Code (COIP) and in the arguments presented in the four days of hearing by all the parties to the proceedings in the case of unlawful association, Judge Miguel Jurado relied to exclude from the trial stage the testimonies of Rafael Correa , former president, and Diego García, attorney. The testimonies were requested as part of the testimonial evidence requested by the defense of the private accuser César Montúfar for the trial hearing.

The Prosecution explained that for the effectiveness of the illegal system that Odebrecht implemented in Ecuador, not only did it create subsidiary companies such as Norberto Odebrecht Ecuador, but it also had the support of front companies or paper companies, which are listed as suppliers. He also used legally incorporated companies in the country, linked to the construction sector. For the operation of the bribery scheme, he also used offshore companies in tax heavens.

Employees of seized media subsist with other activities