Fernando Villavicencio and Cléver Jiménez may go to jail once more 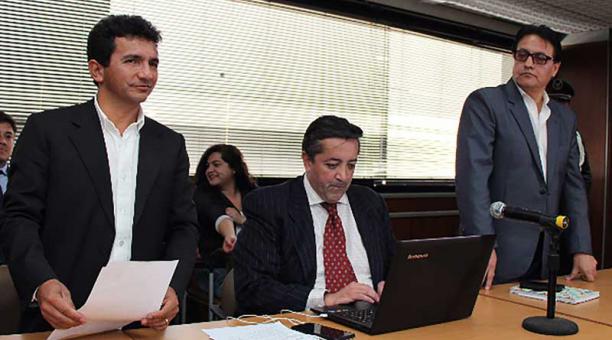 The Contentious Tax Court accepted the appeal of the legal secretary of the Presidency, Alexis Mera. Thus, the Court rejected the writ of habeas corpus filed by the defense of Cléver Jiménez and Fernando Villavicencio. Their defense lawyer, Julio César Sarango, confirmed it today. He will submit an appeal for clarification and extension. The purpose of these remedies is to request the judge to reconsider if it can be corrected, a particular order issued previously. Both defendants are currently in their homes.
Sarango said that the Contentious Tax Court “did everything set out by Mera” on November 30 when he filed the appeal. “The Court says that the habeas corpus does not fit if the defendants have not been detained. This is not correct, this resource is universal and can also prevent a detention.” The defense has three days to avoid the execution of the sentence. He said he would submit the appeal today. On November 21, in court 3 of the National Court of Justice, the habeas corpus hearing requested by the defense of the former assembly member Cléver Jiménez and the former syndicalist Fernando Villavicencio was held. The court, chaired by Edgar Flores, accepted that appeal.

This implies that both defendants could not be detained during the legal process against them for purportedly disseminating confidential information of public officials. Earlier, on November 14, Judge Jorge Blum of the National Court of Justice issued the preventive detention order against both.